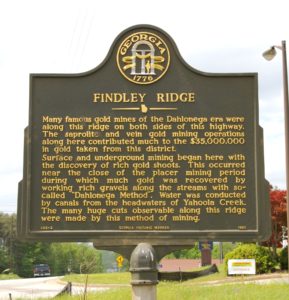 This week’s #MarkerMonday highlights the 1828 Dahlonega Gold Rush in North Georgia. Following the discovery of gold in what later became known as Dahlonega in 1828 and 1829, thousands of people flocked to North Georgia into Cherokee territory. Coupled with the state taking over jurisdiction of the Cherokee land and selling parcels through the land lottery, the Cherokees referred to this mass migration as the “Great Intrusion.” In 1833, the city of Dahlonega was formally established and became the county seat of Lumpkin County. Many gold mines were situated along Findley Ridge on Crown Mountain. The ridge, contained largely in Land Lot 1048, was divided into half and quarter lots and sold. The property changed hands often between 1833 and 1858. 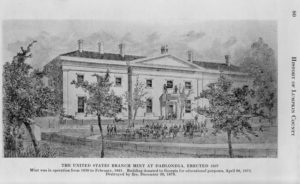 In 1858, James Jefferson Findley purchased the property and began to mine the ridge. Findley Ridge, as it became known, was the site of both surface and underground mining using a practice known as placer mining, which included panning for gold along a stream bed. As this practice came to an end in in 1850s, much of the gold recovered from Findley Ridge was done using the “Dahlonega Method,” a form of hydraulic mining using high-pressured water jets to dislodge rock and sediment which was then cycled through a filtering system to separate out the gold. Many of the large cuts in the ridge are a result of this mining method. Dahlonega thrived during the gold rush, and the mines along Findley Ridge continued to operate into the 1920s and 1930s. In the 1960s, a roadside park was created along a portion of Highway 60 where the road crosses through a portion of Findley Ridge. Today much of Findley Ridge is privately owned and not accessible by the public.

Explore the links below to learn more about the Dahlonega Gold Rush and Findley Ridge.

GHS is proud to house the Dugas family letters, which feature the family interests in the Dahlonega gold mines and iron castings appear throughout the collection.

Dahlonega Gold Museum is a participating site in the 2018 Super Museum Sunday. For more information, visit the http://georgiahistoryfestival.org/.