In honor of the 2016-2017 Georgia History Festival, “A State of Innovation,” the February #MarkerMonday posts will focus on Savannah, the founding city of Georgia, and the many different groups of people that came to settle in Georgia. Over the course of the month, these posts will discuss four different communities that settled in Savannah and south Georgia. 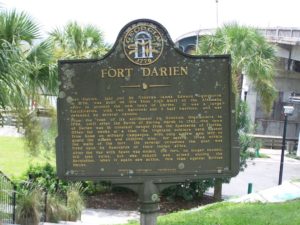 This week’s #MarkerMonday shines a spotlight on the Scottish Highlanders, a group of settlers who were recruited by General James Edward Oglethorpe to provide a military buffer between the English Colony of Georgia and the Spanish in Florida. In October 1735, the Scots left Inverness, Scotland on the Prince of Wales, settling on the northern bank of the Altamaha River, 60 miles south of Savannah. Here they established the port town of New Inverness, later renamed Darien after an unsuccessful colonization attempt at the Isthmus of Panama by the Kingdom of Scotland. As an incentive to move to the colony and provide military protection, the Georgia Trustees offered the Scots fifty acres of land per family to farm and raise cattle. 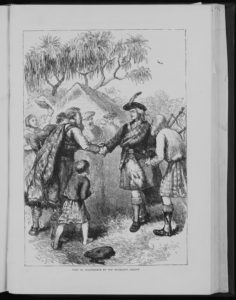 The Scots were also given tools for farming, cattle to tend, and weapons, which were used to further the Trustees’ goal of establishing a colony that would be economically beneficial for the British Empire. Under the leadership of John McIntosh Mohr and Hugh Mackay, the Highland Scots built Fort Darien to replace the abandoned Fort King George. Previously, Fort King George was an outpost for the Colony of South Carolina and was patrolled by an outfit of retired soldiers deemed fit for light duty, until sickness among the men, intense heat, and a mysterious fire required them to abandon the post. During the conflict with Spain in 1740, also known as the War of Jenkins’ Ear, the Highland Scots served with Oglethorpe at the Siege of St. Augustine. They also played a crucial role in defeating Spanish invaders at St. Simons Island at the Battles of Bloody Marsh and Gully Hole Creek in 1742, helping solidify English claims in North America. The use of Fort Darien diminished following the defeat of the Spanish in the battles on St. Simons Island. It was manned for a brief time during the Revolutionary War but was abandoned ahead of the British invasion in 1778. Today, the ruins of the fort can be seen in Darien.

Explore the links below to learn more about Scottish Highlanders and Darien.

The Georgia Historical Quarterly, “Highland Scots and the Georgia Lowlands”– This article is available on JSTOR and can be read for free online.