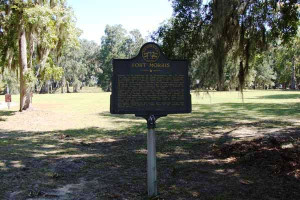 Today’s #MarkerMonday highlights Fort Morris, a military installation constructed in Liberty County at the beginning of the American Revolution, named in honor of Captain Thomas Morris – the commander in charge of the first artillery unit to occupy the garrison. On November 25, 1778, the British demanded that the American forces surrender the institution immediately. The commander at the time, Colonel John McIntosh, defiantly responded, “Come and take it!” Knowing they had an insufficient number of troops to successfully do so, the British retreated back to Florida. A few months later, on January 9, 1779, the fort fell to British forces after enduring a short but heavy bombardment.

Explore the links below to learn more about Fort Morris.