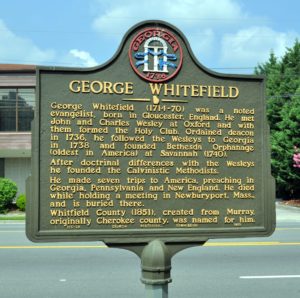 This week’s #MarkerMonday shines a spotlight on the life and work of George Whitefield. Born in Gloucester England, Whitefield (also spelled Whitfield) attended Oxford where he met John and Charles Wesley and became a member of their Bible study and prayer group, also known as the “Holy Club.” When the Wesleys left England to come to Georgia, Whitefield remained in England and became the group’s leader. In 1736, he became an ordained deacon in the Anglican Church and spent the next year preaching in England and collecting funds for the Wesleys’ church in Georgia. In May 1738, he accepted the invitation from John and Charles Wesley to join them in Georgia, the first of seven trips to America in his lifetime. 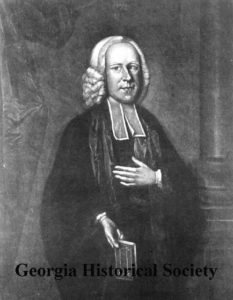 Following the Wesleys’ departure back to Great Britain, Whitefield was named minister to Savannah by the Georgia Trustees. Upon his arrival to Georgia, Whitefield was struck by the lack of provision for orphans in the young colony and determined to raise funds to open an orphanage. Raising the funds, Whitefield founded the Bethesda Orphanage in Savannah in 1740 and continued to support the organization for the rest of his life. Whitefield also preached alongside several well-known American pastors such as Jonathan Edwards, William and Gilbert Tennent, and Samuel Davies. These collaborations with Whitefield were part of a larger evangelical revival known as the “The Great Awakening” in the 1730s and 1740s.  While visiting New England for a preaching engagement, Whitefield passed away September 30, 1770 in Newburyport, Massachusetts and is buried beneath the pulpit in the First Presbyterian Church. In 1851, Whitfield County in Georgia was named in his honor.

Explore the links below to learn more about George Whitefield and his evangelistic and philanthropic work.

GHS is proud to house several items in its collections related to George Whitefield, Methodism, and Bethesda Academy. These items can be referenced by searching the GHS Collection Catalog and Digital Images.