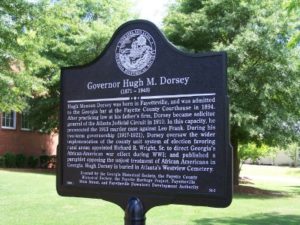 This week’s #MarkerMonday highlights Hugh Manson Dorsey, Georgia’s governor from 1917-1921. Dorsey was born in Fayetteville, Georgia, on July 10, 1871, to Matilda and Rufus Dorsey. After early schooling in Atlanta and Hartwell he attended the University of Georgia (1889-1893) and the University of Virginia law school. He was admitted to the Georgia Bar in 1894 and then joined his father’s Atlanta law firm, later becoming a partner. In 1910, Dorsey became the solicitor general of the Atlanta Judicial Circuit and prosecuted the 1913 murder case against Leo Frank. Frank was accused of murdering Mary Phagan, a young worker at Atlanta’s National Pencil Factory which Frank managed. The trial was highly sensationalized in newspapers, many of which published stories with strong anti-Semitic rhetoric.  Dorsey, virtually unknown before the trail, won a conviction in the case, a contributing factor to his rising political popularity. 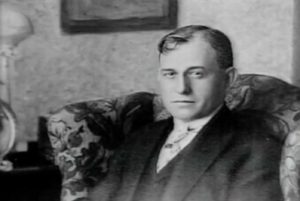 Dorsey ran for governor in 1916 and defeated incumbent Nat Harris. Serving two terms as Georgia’s governor, Dorsey guided reforms in the state’s election process; offered tax exemptions to academic, religious, and public spaces; and supported mandatory education for both African-American and white students. He also oversaw the state’s implementation of a county-unit system for elections, favoring the state’s rural areas by allotting votes by county and not by population. In 1920, Dorsey ran unsuccessfully for U.S. Senator. As one of his last acts as governor, Dorsey published in 1921 a pamphlet, A Statement from Governor Hugh M. Dorsey as to the Negro in Georgia, opposing the unjust treatment of African Americans in Georgia. After leaving office Dorsey resumed his law practice and served as an Atlanta City Court judge from 1926-1935. Dorsey later became a superior court judge of the Atlanta Judicial Circuit, a position he held until his death. Dorsey died June 11, 1948, and was buried in Atlanta’s Westview Cemetery.

Explore the links below to learn more about Governor Hugh M. Dorsey and his political and law career.

Dorsey, Hugh M. A Statement from Governor Hugh M. Dorsey as to the Negro in Georgia. Atlanta: 1921. Accessed through Internet Archives.