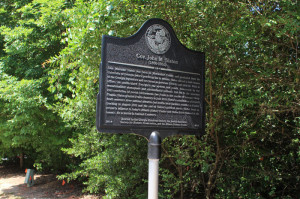 This week’s #MarkerMonday highlights John Marshall Slaton, who served as Georgia’s governor from 1911-1912 and 1913-1915. On December 25, 1866, John Marshal Slaton was born near Greenville in Meriwether County, Georgia, to Nancy and William Slaton. Slaton attended the Sam Bailey Male Institute in Griffin, Georgia before eventually graduating Boys High School in Atlanta. He continued his education at the University of Georgia receiving a master of arts degree in 1886. The following year he was admitted to the bar and began practicing law in Atlanta. Slaton’s political career began in 1896 when he was elected to the Georgia House of Representatives. He served in the House until 1909, serving as Speaker of the House his last few years. That same year he was elected to the Georgia State Senate, a position he held until 1913.

When Governor Hoke Smith won election to the U.S. Senate in 1911, Slaton, as the president of the state senate, was appointed acting Georgia governor. He was acting governor from 1911-1912, completing Smith’s term. Slaton was later elected to the governorship in his own right and served from 1913-1915.  While in office, he modernized Georgia’s tax system, preserved the state-owned Western and Atlantic Railroad by arranging a new lease for the company, and paid teachers’ salaries in full after several months of teachers not receiving pay checks. Slaton received multiple death threats for his decision and a mob threatened to attack him at his home. Hostile local backlash resulted in Frank’s lynching in Marietta in August 1915 and the end of Slaton’s political career. Following his term as governor, Slaton did not hold another publicly elected office. He served as the Georgia Bar Association president from 1928-1929 and chaired the Board of Law Examiners. Slaton died on January 11, 1955. He is buried in Oakland Cemetery in Atlanta.

Explore the links below to learn more about John M. Slaton’s governorship, policies, and the Leo Frank case.

The Atlanta Jewish Times: Governor in the Leo Frank Case to be Honored

Profiles in Courage: John Slaton (49-minute video that aired on NBC in 1964. Accessed via Internet Archives)