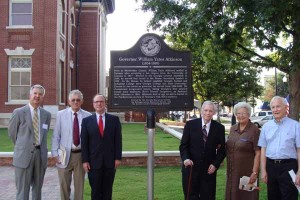 This week’s #MarkerMonday highlights William Yates Atkinson, Georgia’s governor from 1894-1898. Atkinson was born in Meriwether County on November 11, 1854, to John Pepper Atkinson and his second wife, Theodora. After graduating from the University of Georgia in 1877, Atkinson moved to Newnan, Georgia, to practice law. Two years later, Governor Alfred H. Colquitt appointed him solicitor to the Coweta Judicial Circuit in west Georgia. In 1886, Atkinson was elected to and served four terms in the Georgia House, where he worked to establish Georgia Normal and Industrial College (now Georgia College and State University). 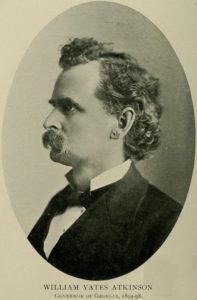 Atkinson left the House and served two terms as governor. Advocating for many progressive issues, Atkinson hired Georgia’s first salaried female state employee, increased funding for the public-school system, and increased pensions of Confederate soldiers and widows. Atkinson, known for his condemnation of violence towards African Americans and mob rule, created laws strengthening both the power of sheriffs and the legal penalties for inciting or participating in mob violence. He also called for revision of the convict lease system and established a prison commission to curb abuses in the system and oversee inmates’ treatment. After leaving office in 1898, Atkinson returned to Newnan to practice law. One year later, Atkinson attempted to prevent the lynching of Sam Hose, a local black man accused of rape and murder. His pleas for Hose to receive a fair trial failed, and he was killed by a mob on April 23, 1899. Later that same year, Atkinson became sick while on a business trip in Florida, and passed away August 8, 1899. Atkinson is buried in Newnan’s Oak Hill Cemetery, and, in 1917, Atkinson County was named in his honor.

Explore the links below to learn more about William Yates Atkinson, his two terms as governor, and his progressive policies.

GHS is proud to house a collection of Thomas B. Irwin’s correspondence. Papers in this collection discuss Atkinson’s first campaign for Georgia’s governor in 1894.