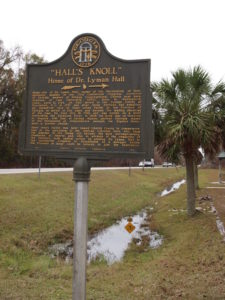 This week’s #MarkerMonday discusses Lyman Hall, one of Georgia’s three signers of the Declaration of Independence. Hall was born in Wallingford, Connecticut, on April 12, 1724. In 1747, he graduated from Yale University and became an ordained Congregational minister. After giving up ministry to practice medicine, Hall moved to Dorchester, South Carolina, in 1757, and later to St. John’s Parish, Georgia (present day Liberty County) with the Rev. Mr. John Osgood and his congregation. Hall and the other residents of St. John’s Parish were among the first Georgians to support the cause of Liberty at a time when many in the 13th colony were slow to rebel against royal rule. Hall acted as a parish representative in the Second Continental Congress in 1775−before Georgia consented to send official representatives from the colony. 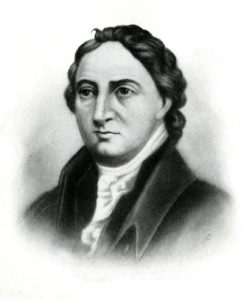 The Declaration of independence; illustrated story of its adoption, with the biographies and portraits of the signers and of the secretary of the Congress. Image Courtesy of the Georgia Historical Society, Rare Book Collection, E221 M62.

The following year, Hall became an official representative of Georgia and joined Button Gwinnett and George Walton in signing the Declaration of Independence. In 1780, British troops occupied Savannah and seized Hall’s property including his plantation, Hall’s Knoll in St. John’s Parish. Hall, considered a traitor by the British for signing the Declaration of Independence, fled with his family to Connecticut on the advice of General George Washington. After the Revolutionary War, Hall returned to the Savannah-area and resumed his medical practice in 1782. Hall also served as a member of the Georgia General Assembly and rose to be Governor of Georgia in 1783-84. While Governor, Hall advocated for chartering the University of Georgia and dealt with the fledgling state’s financial challenges and conflicts with Native Americans and Loyalists on Georgia’s massive frontier. In 1790, he moved to Burke County where he purchased Shell Bluff Plantation. Hall passed away later that year and was buried on the plantation grounds. In 1818, the State of Georgia name Hall County in his honor. Hall’s body was reinterred in 1848 in Augusta, along with that of George Walton, beneath the Signers Monument, dedicated to the three Georgians who signed the Declaration of Independence.

Top Image is taken from larger image of the American flag. Public Domain.

Explore the links below to learn more about Lyman Hall, the Declaration of Independence, and the Revolutionary War in Georgia.

GHS is proud to house The State of Georgia’s Papers of the Continental Congress 1775-1788 on two rolls of microfilm.

UShistory.org- Signers of the Declaration of Independence: Lyman Hall

City of Midway, Georgia: Our Past