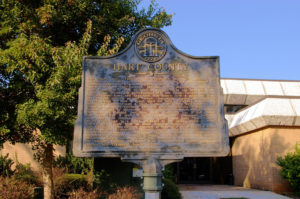 This week’s #MarkerMonday shines a light on Nancy Hart, a devout Patriot and the only female to have a county named after her in Georgia. Her exploits during the American Revolution have helped to make her the stuff of legend and folklore. While little is known of the earlier part of her life, it is believed that Nancy Hart was born in North Carolina c.1735. In the early 1770s, Hart moved with her husband, Benjamin, from North Carolina to Georgia, settling in the Broad River Valley in North Georgia. During the Revolutionary War, Hart often remained at home with her children while her husband was away serving in the Georgia militia as a lieutenant under General Elijah Clark. According to local lore, it is believed that Nancy Hart also served as a spy for the revolutionary cause, posing as a “simpleminded” man and wandering behind British and Loyalist lines to collect information. 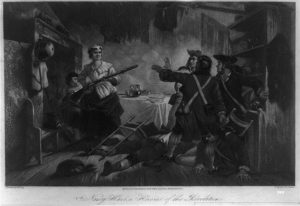 Nancy Hart: A heroine of the Revolution. Image Courtesy of the Library of Congress. Prints and Photographs Division, LC-USZ62-704.

The most famous of Nancy Hart’s revolutionary escapades took place when a group of Loyalists forced their way into her home and demanded that she prepare dinner for them. According to legend, as Hart occupied the soldiers with food and drink, she sent her daughter to call for help. When the soldiers noticed Nancy Hart stealing their weapons, she shot and killed one of the men and wounded another. Hart held the remaining soldiers at gunpoint until help arrived, at which the remaining Loyalist soldiers were hung. After the war, Hart and her family left the Broad River Valley and moved to Brunswick. Following the death of her husband, Hart returned briefly to their old homestead before moving to Athens, Georgia, to live with her son. In the early 1800s, the Hart family moved to Henderson County in Kentucky. Hart passed away in 1830 and was buried in the family cemetery.  In 1853, Georgia legislators named the newly created Hart County in her honor. Hart was inducted into Georgia Women of Achievement in 1997.

Explore the links below to learn more about Nancy Hart and the Revolutionary War in Georgia.