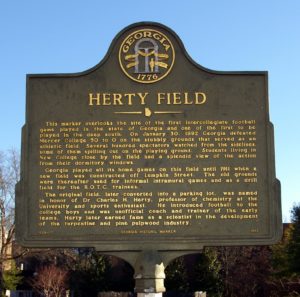 This week’s #MarkerMonday highlights Herty Field, named for chemist Charles Herty and the site of the first intercollegiate football game played in the state of Georgia. After receiving his doctorate from Johns Hopkins University, Charles Holmes Herty returned to his alma mater of the University of Georgia (UGA) as a chemistry professor in 1890. While at UGA, Herty became involved in efforts to revive the stagnant athletics program. He organized and coached the university’s first football team and worked to raise funds for improved athletic facilities such as the Alumni Athletic Field, later renamed Herty Field in Charles Herty’s honor. On January 30, 1892, UGA competed against Macon’s Mercer College in the first intercollegiate football game in Georgia. Under Coach Herty’s leadership, UGA defeated Mercer College 50-0. 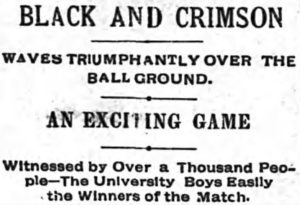 The Athens Weekly Banner described the scene following UGA’s win saying, “Enthusiasm was supreme, boys were riding around on a sea of shoulders, even the goat was ridden.” (Prior to UGA’s adoption of the English bulldog as a mascot, a goat served as mascot for the first football game.)  Reports from the game also mention that nearly a thousand fans attended the game to cheer on the two teams. Georgia played all its home games at Herty Field until 1911 when Sanford Stadium was constructed. The grounds of Herty Field were then used for informal intramural games and as a R.O.T.C. drill field. In the 1940s, the field was converted into a parking lot, and was later converted back into green space in 1999.

Explore the links below to learn more about Herty Field, Charles H. Herty, and the history of UGA football.

Charles H. Herty was one of the featured historical figures for the 2016-2017 Georgia History Festival: A State of Innovation.  Check out GHS’ online learning materials such as the Charles Herty Teacher Guide and Feature Historical Figure Profile.

GHS is also proud to house several collection items related to college football in the State of Georgia, including by not limited to game day tickets, photographs, postcards depicting university stadium, UGA Coach Vince Dooley’s play diagrams, and other memorabilia. These items can be referenced by searching GHS’s Digital Images Catalog.

This Day in Athens- 30 January 1892: Georgia Is Victorious in First Football Game, Creates an Athens Obsession

Georgiadogs.com: History of Our Mascot

Reed, Thomas Walter. History of the University of Georgia. Hargrett Rare Book and Manuscript Library, as presented in the Digital Library of Georgia.