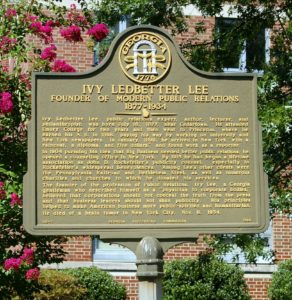 This week’s #MarkerMonday recognizes National Publicist Day on October 30, with the Ivy Ledbetter Lee, Founder of Modern Public Relations 1877-1934, historical marker. On October 28, 1906, a three-car train with the Pennsylvania Railroad Company ran off a trestle into a lake killing 50 people. Lee immediately started working with the company—he sent out a formal statement to the press on its behalf and organized a train to take reporters to the scene of the incident. The New York Times printed the “Statement from the Road” two days later. This was one of many railway accidents and the Company was receiving backlash from the public. Their newfound need to sway public opinion inspired a long-term focus on safety.

Ivy Lee was born near Cedartown, Georgia, in Polk County on July 16, 1877. After attending Emory College for two years, he transferred to Princeton where he graduated in 1898. Lee eventually moved to New York to work as a reporter before ultimately going to work as a political and corporate publicist. In 1905, while representing the coal industry, Lee successfully persuaded the industry insiders to offer honest and full transparency through a factual accounting of their practices regarding a coal strike to the press. This led to Lee’s famous “Declaration of Principles” that focused on open and honest dialogue with the public and the media and offered assistance to any journalist to verify any statements of fact.

Recognizing that better understanding and factual reporting would result in broader good will from the public, Lee further revolutionized the Public Relations industry by reversing the policy of secrecy surrounding industrial accidents by taking reporters directly to the scene of a railroad accident. It was during this time that on October 28, 1906, Ivy Lee issued the first press release detailing the incident. The contents of the release, or statement as it was called at the time, were carried verbatim by The New York Times on October 30. One hundred and fourteen years later the press release remains the most widely used tool in the public relations industry for conveying announcements to the media.

The foundation of Lee’s approach can be seen in his “Declaration of Principles,” published in 1905. In it he states that the public should receive “prompt and accurate information concerning subjects which it is of value and interest to the public to know about,” concerning businesses and public institutions. By following Lee’s Principles, people and companies were able to become more public-spirited and humanitarian.

Lee worked with major clients including the American Red Cross, Bethlehem Steel, American Tobacco, Princeton, and John D. Rockefeller. However, his career underwent public scrutiny after working with the German Dye Trust, a chemical and pharmaceutical company and proponents of the Nazi Party in Germany. Lee believed he could influence the company to alter the policies of Adolf Hitler but nonetheless was dubbed “Poison Ivy” by members of Congress who saw his affiliation as un-American and cast a pall over the last years of his career. In spite of that he is still remembered as the Father of Modern Public Relations for his efforts to create a sense of public accountability for organizations to consider.