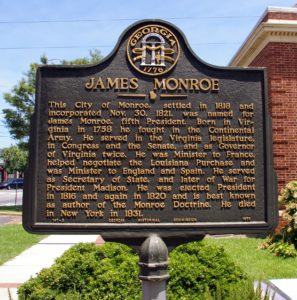 This week’s #MarkerMonday highlights James Monroe, one of the United States’ Founding Fathers. Although a native Virginian, a city was named after him in Walton County, Georgia. During his extensive career, Monroe served as a representative to Virginia in Congress and the Senate, represented the United States as ambassador to France, England, and Spain, and worked as Secretary of State and Secretary of War under President James Madison.

Monroe is remembered as the author of the Monroe Doctrine during his presidency. It was a significant international policy issued in December 1823 and characterized Unites States diplomacy for over a century. The Monroe Doctrine declared the United States’ opposition to European colonialism in the Americas. It firmly stated that European nations should not regard the American continent as land that could be colonized any longer. 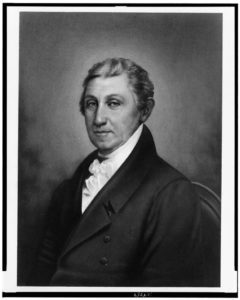 Many European colonies in North and South America achieved independence, and the United States felt it was strong enough to claim a sphere of influence over the continent to keep European countries from causing more conflict there. It also stated that any attempts at colonization would be labeled as a violation of American peace and safety. It also stated that the United States would not encroach on existing European colonies or interfere with internal issues between a colony and its European colonizer. The motivation was to free the New World from the conflicts of the “Old World,” namely Europe.

The city of Monroe was incorporated in 1821, during President Monroe’s second term in office. According to the city’s account, Elisha Betts, another Virginian, donated land to the city which at the time was called Spring Place. The land was meant for gathering spaces, public and private cemeteries, and county buildings. Betts asked that the town be named for the fifth president. Other places in Georgia, like Monroe County, were also named in his honor. Although he was not a Georgian, President Monroe’s legacy affected generations of Americans through his leadership in politics.

Explore the links below to learn more about James Monroe and the communities named after him in Georgia.

GHS is proud to house the William Harris Crawford Collection that includes correspondence to James Monroe and other politicians like Thomas Jefferson. It also holds James Monroe Legislation from his time as Secretary of State.

The City of Monroe