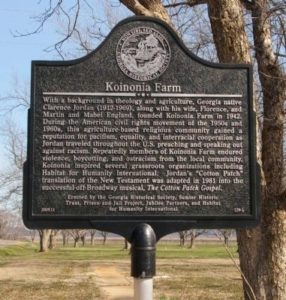 This week’s #MarkerMonday looks at Koinonia Farm and one of its founders, Clarence Jordan. Jordan was born on July 29, 1912 in Talbotton, Georgia. He attended the University of Georgia to study agriculture. After graduating from UGA, Jordan attended the Southern Baptist Theological Seminary and became an ordained Baptist minister. Along with his wife, Florence, and Martin and Mabel England, Jordan founded Koinonia Farm in 1942, combining Jordan’s faith and passion for agriculture. The farm was established as a Christian community in which members, regardless of race or class, pooled resources and treated each other as equals. During the American civil rights movement, the community gained a reputation for pacifism, equality, and interracial cooperation. In 1968, Millard Fuller joined with Jordan to create Koinonia Partners, a low cost housing program that inspired Fuller to found Habitat for Humanity several years later. Jordan led Koinonia from 1942 until his death in 1969. During this time, he also traveled around the United States preaching and opposing racism.  Jordan is buried at Koinonia along with his wife, Florence.

Explore the links below to learn more about Koinonia Farm and Clarence Jordan.