In anticipation of Super Museum Sunday on February 11, 2018, January’s  #MarkerMonday posts will explore the history of sites participating in the state-wide event. 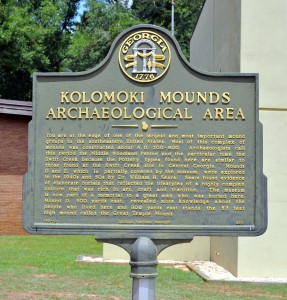 This week’s #MarkerMonday highlights the Kolomoki Mounds Archaeological Area in Early County, Georgia. The Kolomoki Mounds site is one of the largest American Indian mound sites in Georgia. The Kolomoki Mounds are comprised of seven mounds (A-F and H; Mound G is privately owned), dating as far back as the Woodland Period (1000 B.C.E. to 900 C.E.) when permanent larger-scaled settlements and mound building first appeared in Georgia. Archaeological excavations give many details about the use of the mounds. As those who inhabited Kolomoki Mounds did not have written language, archaeologists can infer the uses of mounds through excavation. For example, excavations of Mounds B and C uncovered remnants of large wooden posts, which some theorize may have been used in religious ceremonies. Furthermore, excavations of Mounds D and E show that they served as burial sites. 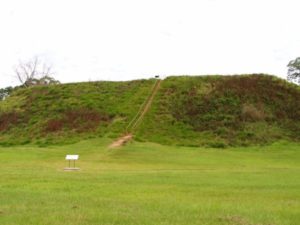 Small-scale excavation began at Kolomoki in the 1800s. During the late 1880s, archaeologists working in association with the Smithsonian Institution provided some of the early descriptions of the site and excavated trenches around Mounds A and E. Modern excavation of Kolomoki began in the 1940s, with archaeologist William Sears conducting excavations at the site from 1948 to 1953. He believed Kolomoki dated to the Mississippian Period (800-1600 C.E.), an era in which large, flat-topped or platform mounds were built in the Southeast and Midwest. While Kolomoki does feature flat-topped mounds, through archaeological evidence most believe that the period of occupation at the site was mainly during the Woodland Period.

Explore the links below to learn more about the Kolomoki Mounds and Georgia’s prehistory.

Kolomoki Mounds State Historic Site is a participating site in the 2018 Super Museum Sunday. For more information, visit the http://georgiahistoryfestival.org/.

The Society of Georgia Archeology: Learning through Archeology- Kolomoki (This link also has a downloadable lesson plan for teachers)