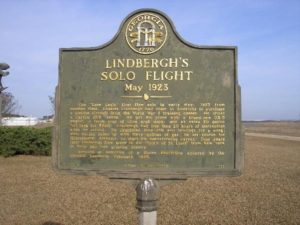 This week’s #MarkerMonday highlights the role Georgia played in the career of American aviator, Charles Lindbergh. In May 1923, Lindbergh flew his first solo flight at Souther Field (now Jimmy Carter Regional Airport) in Americus, Georgia.  Lindbergh first came to Georgia to purchase a surplus aircraft from the recently deactivated World War I training center at Souther Field. There, Lindbergh purchased a crated Curtiss JN-4 “Jenny” and supplies for $500. He stayed in of the field’s vacant hangars while waiting a week for the plane to be assembled. 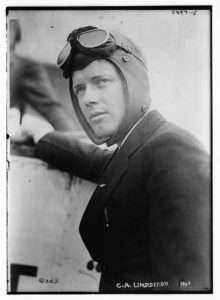 Photograph of Charles A. Lindbergh. Image Courtesy of the Library of Congress, Prints and Photographs Divsion, LC-DIG-ggbain-35317.

With less than 20 hours of flying instruction, a fact that he did not advertise, and no solo-flying experience, Lindbergh practiced take-offs and landings with a member of the air field staff the morning following the completion of the plane’s construction. Lindbergh made his first solo flight from Souther Field over Americus later that same day. Lindbergh remained at the air field for another week practicing take-offs and landings. After logging additional flight time, he left Souther Field for Montgomery, Alabama to begin his barnstorming career.  In 1926, Lindbergh would go on to be the first person to from New York to Paris. Now an international celebrity, he returned to Georgia in 1927 as part of his 48-state tour in his plane, The Spirit of St. Louis. William Hartsfield, Atlanta alderman and aviation enthusiast, played a key role in bringing Lindbergh to Atlanta. He paraded through downtown Atlanta past thousands of cheering onlookers to Georgia Tech’s stadium, Grant Field (now Bobby Dodd Stadium). At the stadium, Lindbergh spoke about the potential of commercial flight. The next morning, Lindbergh boarded The Spirit of St. Louis and flew to his next stop, Spartanburg, South Carolina.

Top Image taken from larger image of The Spirit of St. Louis in the Smithsonian Air and Space Museum. Image Courtesy of the Library of Congress, Prints and Photographs Division, LC-DIG-highsm-14956.

Explore the links below to learn more about the Charles Lindbergh, his time in Georgia, and his aviation career.

GHS is proud to house a souvenir from Charles Lindbergh’s first plane a JN-4 “Jenny,” a piece of wood cut from the lower left wing of the plane.