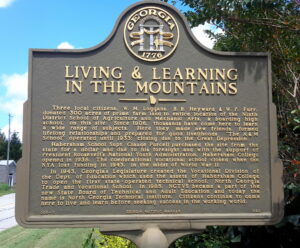 This week’s #MarkerMonday highlights the history of North Georgia Technical College, the first state-operated technical school in the State of Georgia. In 1906, the State of Georgia passed an act calling for the creation of one agriculture and mechanical arts college for each of Georgia’s eleven Congressional districts. These colleges were designed to teach students in rural areas in Georgia about modern agricultural and industrial practices and techniques. In 1907, the Ninth District School of Agriculture and Mechanical Arts, referred to as “The A & M School,” opened as a boarding high school in Clarkesville, Georgia. The school remained open until 1933, when it closed due to difficulties caused by the Great Depression. 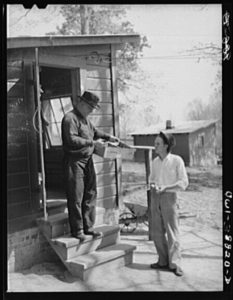 The A & M School reopened as the Habersham College, a coed vocational school, in 1938 and received funding from the National Youth Administration (NYA), one of President Franklin D. Roosevelt’s New Deal programs during the Great Depression. The NYA offered a student work program, allowing students to work in school libraries, laboratories, etc., as they furthered their education.  The NYA also introduced an out-of-school program for young people between the ages of 16-24, which allowed for on-the-job training in construction, metalworking, carpentry, office work, and other occupations.

In 1943, the school closed when the NYA lost funding during World War II. Later that year, the Georgia Legislature created the Vocational Division of the Dept. of Education which resulted in the opening of the first state-operated vocational school, North Georgia Trade and Vocational School, which was located on the site of the old A&M School. The new school offered programs such as automotive mechanics, radio and communications, and welding. In the post-war years, the school’s campus began to expand. Between 1962 and 1987, the school would change its name twice reflecting the increasing role of technology in vocational training and its inclusion in the new state board, the Technical College System of Georgia (formed in 1985). In 1995, the school, now North Georgia Technical Institute, opened a second campus in Blairsville, Georgia. The school officially changed its name to North Georgia Technical College (NGTC) after the State of Georgia passed House Bill 1187 into law in 2000, allowing institutions that offered associate degrees to become technical colleges. NGTC continued to expand and opened the Currahee Campus in Toccoa, Georgia in 2005.