Marker Monday: M.E. Thompson and the Purchase of Jekyll Island 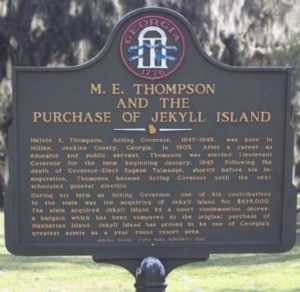 This week’s #MarkerMonday highlights the state of Georgia’s purchase of Jekyll Island. In 1886, the Jekyll Island Club, a private hunting and recreational club, purchased Jekyll Island from the du Bignon family and began its 61-year ownership of the island. During the Jekyll Island Club’s ownership, the island hosted many well-known Northern businessmen including Marshall Field, Henry Hyde, J. P. Morgan, Joseph Pulitzer, and William K. Vanderbilt. Jekyll Island continued to flourish as a resort location for many American millionaires into the 1930s. Following the United States’ entrance into World War II, the Jekyll Island Club only opened for a short time during the 1942 season due to financial problems, ration of commodities, and wartime strain on labor. 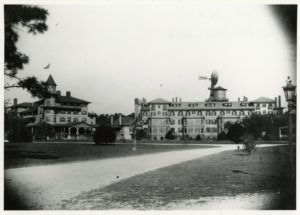 The club decided to remain closed for the duration of the war with hopes of reopening after the war, however, the island was in a state of disrepair by the late 1940s. Palmetto roots had overtaken many of the island’s principle roads, and the club and power houses were also in need of extensive repairs. The club’s directors were also struggling to attract new members. During this time, Melvin E. Thompson, the state’s revenue commissioner, expressed interest in purchasing Jekyll Island for use as a state park. In 1947, when Thompson was acting governor, the state bought the island for $675,000 through a condemnation order. Following the purchase, the island became Jekyll Island State Park and operated as part of the state parks system in 1948-49.  To manage the maintenance and operation costs of the island, the state government chartered the Jekyll Island Authority (JIA) to manage the island on its behalf for ninety-nine years to begin in 1950. Today, JIA manages and promotes the island’s amenities and Historic District. JIA also operates municipal services for residential communities, several hotels, rental cottages, and businesses on Jekyll Island.

GHS is proud to house the original membership list of the Jekyll Island Club as part of the Sea Island Company Records.