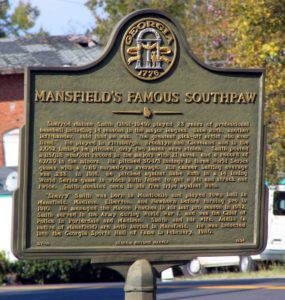 This week’s #MarkerMonday highlights professional baseball player, Sherrod Malone “Sherry” Smith. Born in Monticello, Georgia, in February 1891, Smith grew up playing baseball in Mansfield, Madison, Elberton, and Newborn, Georgia. At the age of 19, Smith, a southpaw or left-handed pitcher, turned pro. Starting in 1911, Smith pitched for the Pittsburgh Pirates before going to play for the Brooklyn Robins (later the Brooklyn Dodgers) from 1915-1922. While playing for the Robins, he pitched fourteen innings against Babe Ruth and the Boston Red Sox in the second game of the 1916 World Series, one of the longest World Series games to date. 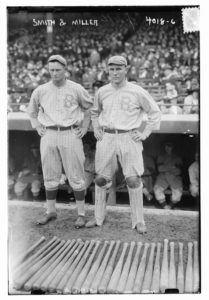 Only two bases were stolen during Smith’s career as a pitcher and Babe Ruth even considered him “the greatest pickoff artist who ever lived.” In 1917, Smith was one of the first major league players to be drafted into military service during World War I, serving in the United States Army stationed in France. After the war, he resumed playing for the Brooklyn Robins. From 1922-1927, Smith played for the Cleveland Indians. Smith ended his baseball career as coach and manager for the Macon Peaches in 1932. Following his twenty-three-year career playing professional baseball, Smith returned to Mansfield and began a career in law enforcement as Police Chief in Porterdale and Madison, Georgia and later served as a guard at the state prison in Reidsville. Smith died of heart disease in September 1949 and is buried in Mansfield. He was posthumously inducted into the Georgia Sports Hall of Fame in 1980.

Explore the links below to learn more about Sherrod Malone “Sherry” Smith and his baseball career.