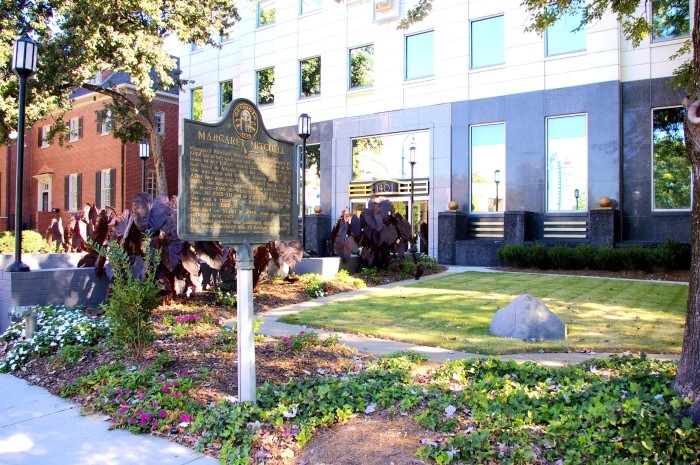 Today’s #MarkerMonday is dedicated to accomplished Georgia writer Margaret Mitchell, who was born this week (November 8th) in 1900. She is the Pulitzer Prize winning author of one of the most successful novels of all time, Gone With the Wind. Mitchell spent her entire life in Atlanta, and began writing the popular novel in 1926 while stuck at home with a broken ankle. She spent ten years writing before Gone with the Wind was finally published on June 26, 1936, and sold over one million copies within the first six month. Mitchell would also sell the film rights that same year for $50,000 – an unprecedented amount for the time.

For the remainder of her life, Mitchell worked tirelessly to protect her authorship in international copyright agreements. She answered every fan letter she received the first few years after the book’s publication and supervised the production of the film. She was also a dedicated philanthropist and worked extensively for the American Red Cross throughout World War II. Mitchell tragically passed away in 1949 after being struck by a car on Peachtree Street in Atlanta. She is buried at Historic Oakland Cemetery.

Explore the links below to learn more about Margaret Mitchell, her literary career, and Gone with the Wind.

GHS is proud to house a collection of papers from the Georgia Writers Conference.