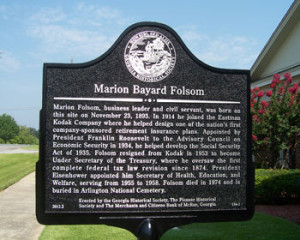 Today’s #MarkerMonday honors Georgia native Marion Bayard Folsom, a federal government official and businessman, who passed on September 27, 1976. The McRae native was born in 1893 and attended the University of Georgia before receiving a Masters in Business Administration from Harvard. He went on to spend nearly forty years at the Eastman Kodak Company. He also served as a member of the Advisory Council on Economic Security, worked under the U.S. Secretary of Treasury, and was appointed Secretary of Health, Education, and Welfare by President Eisenhower.