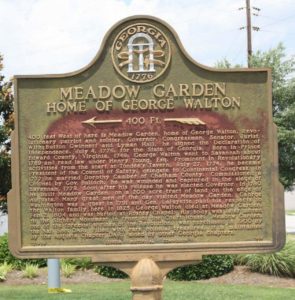 This week’s #MarkerMonday highlights George Walton, one of Georgia’s three signers of the Declaration of Independence.  Born in Virginia in 1749, Walton was orphaned as a child and raised by his uncle from whom he learned carpentry.  In 1769, Walton moved to Savannah and became the apprentice of local barrister Henry Young. Admitted to the bar in 1774, Walton played an active role in Georgia’s Revolutionary government. He was elected to Georgia’s Provincial Congress before becoming President of the Council of Safety in 1775 and attended gatherings of patriots at Tondee’s Tavern in Savannah. 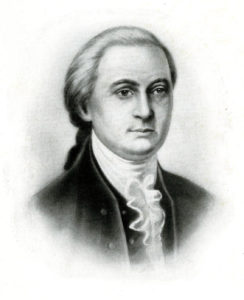 Portrait of George Walton. The Declaration of independence; illustrated story of its adoption, with the biographies and portraits of the signers and of the secretary of the Congress. Image Courtesy of the Georgia Historical Society, Rare Book Collection, E221 M62.

In 1776, Walton served as a delegate to Second Continental Congress, where he signed the Declaration of Independence along with Button Gwinnett and Lyman Hall.  Walton continued to serve in the Congress until his return to Georgia in 1778. He was commissioned a colonel in the Georgia militia shortly after his return and fought against the British during the Siege of Savannah. During the battle, Walton was wounded and captured, but was later released during a prisoner exchange. Walton was elected Governor of Georgia in 1779 and served for two months before returning to serve in the Continental Congress. Following the American Revolution, he continued his career in politics serving various terms as a justice in the state superior court, a delegate to Georgia’s constitutional convention, presidential elector, governor, and United State senator. He built his home, Meadow Garden, in Augusta, Georgia in 1780. George Washington stayed there as a guest during his 1791 Southern Tour. Walton retired from political office in the 1780s to his Augusta home. He died at Meadow Garden on February 2, 1804, and was buried at Rosney Cemetery. In 1848, his body was re-interred in Augusta with that of Lyman Hall beneath the Signers Monument, a granite obelisk. Walton County is named for him.

Explore the links below to learn more about George Walton, the Declaration of Independence, and the Revolutionary War in Georgia.

GHS is proud to house The State of Georgia’s Papers of the Continental Congress 1775-1788 on two rolls of microfilm. GHS is also proud to house George Walton’s letters and biography, 1778-1797 as well as several items related to the Walton and Revolutionary War in Georgia by searching the online catalog.

The Descendant of the Signers of the Declaration of Independence: George Walton

Goodrich, Rev. Charles A. Lives of the Signers to the Declaration of Independence. New York: William Reed & Co., 1856.