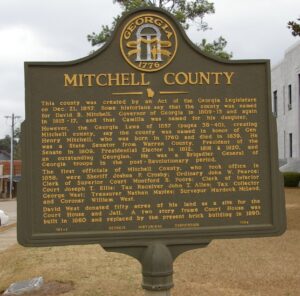 This week’s #MarkerMonday looks at the historical marker for Mitchell County to examine the Camilla Massacre. Mitchell County was founded on December 21, 1857, and reports state that it was named after General Henry Mitchell, although some believe it was named after David B. Mitchell, a Governor of Georgia. After the Civil War, Georgia, like other former Confederate states, had to fulfill Congressional and Presidential requirements for readmittance into the United States by meeting the standards of reconstruction. The opposition of many White Georgians to the policies of the so-called radical Reconstruction (particularly the inclusion of African-American men in politics), was fierce and sometimes violent, resulting in events such as the Camilla Massacre.

Throughout 1867, Georgia was policed by United States soldiers and Freedman’s Bureau agents to ensure that African Americans could peacefully register and exercise their right to vote. These efforts were a success in that 33 African Americans were elected to the Georgia legislature in 1868, allowing US troops to leave their supervisory roles. The departure of US soldiers also allowed moderate White Republicans and conservative Democrats to expel almost all of the newly-elected black officials from the legislature in September 1868.

A Congressional campaign for White Republican William P. Pierce, a former Captain in the United States army during the Civil War, began in Southwest Georgia with the intention of marching to Camilla, the seat of Mitchell County. Accompanying Pierce was Philip Joiner, a formerly enslaved man and one of the recently expelled representatives. They hoped to increase voter turnout for the Republican party, supporting the continuation of federal Reconstruction policy. Pierce, Joiner, and their mostly Black supporters planned to march 25 miles from Albany to Camilla on September 19, 1868. Rumors about armed White men waiting in Camilla spread anxiety throughout the party, but Pierce expressed their right to meet at the Camilla Courthouse. When they entered the public square in front of the courthouse, the party saw armed White men on either side of the square. Pierce and his supporters were warned to halt and when they did not, the White citizens of Camilla open fired on the marchers.

News of the Camilla Massacre spread across the state and country. The exact number of people killed and wounded is unknown, because many marchers were chased into the woods outside of town, but it is estimated that at least a dozen people were killed on September 19. The violence intimidated Republicans from campaigning and voting in rural Georgia and was used as propaganda by each party. However, due in part to instances like this one, in 1869, Georgia was once again subject to military rule and the original members of the 1868 Georgia General Assembly were reinstated.

The Georgia Historical Quarterly has published several articles relating to the Camilla Massacre which can be accessed on JSTOR. If your library does not have access to JSTOR, you can go to www.jstor.org and create a free MyJSTOR Account.

The Camilla Massacre of 1868: Racial Violence as Political Propaganda