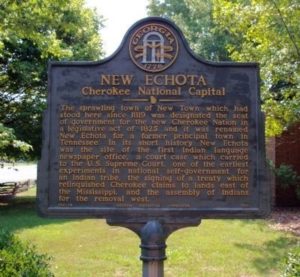 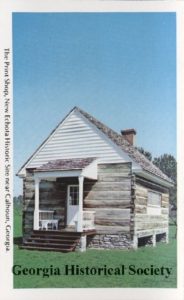 After Sequoyah created the Cherokee language syllabary, the written language form for American Indians, the first Indian language newspaper office was built in New Echota for the newspaper, The Cherokee Phoenix. With Sequoyah’s invention of the syllabary, the Cherokee also drafted and adopted a written constitution, which was designed to solidify the tribe’s sovereignty, resist white encroachment and removal, and to counter existing stereotypes of American Indians as savages. New Echota also provided the backdrop for the Cherokee Nation’s struggle to maintain its sovereignty. In 1832, the US Supreme Court ruled that the Cherokee had their own form of national sovereignty and, as a nation, the United States had no authority over the affairs of the Cherokee or other American Indians. Three years later, New Echota was the site of the signing of the Treaty of New Echota, leading to the relinquishment of Cherokee lands east of the Mississippi River to the US government and the removal of the Cherokee to the west.  Today, the New Echota Historic Site features original and reconstructed Cherokee town buildings- including the print shop, the Council House, and courthouse.

Explore the links below to learn more about New Echota, Sequoyah, and the Cherokee Nation.

Sequoyah is one of GHS’ Featured Historical Figure for the 2016-2017 Georgia History Festival. Check out the GHS’ online learning materials.