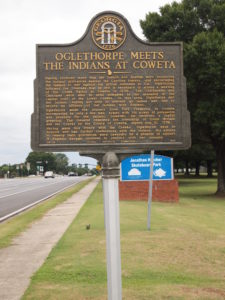 This week’s #MarkerMonday commemorates General James Edward Oglethorpe’s meeting with the Creek Nation on August 21, 1739. When the Colony of Georgia was founded in 1732, it was a philanthropic enterprise, and served as a physical buffer between Spanish Florida and the English colonies. In the early years of the colony, Oglethorpe established several military outposts, such as Fort Frederica on St. Simons Island, to defend against the Spanish in Florida. Oglethorpe also worked to ensure the survival of Georgia by developing and maintaining peaceful relationships with neighboring Native American tribes. In 1739, Oglethorpe received news that the Spanish were trying to undermine relations between the Lower Creeks and the colonists, which were tenuous due to the colonists’ encroachment upon Creek lands in the Georgia frontier.  Concerned for the wellbeing of the young colony, Oglethorpe told the Georgia Trustees it was necessary to attend a meeting of the Creek Nation at Coweta near the Chattahoochee River. 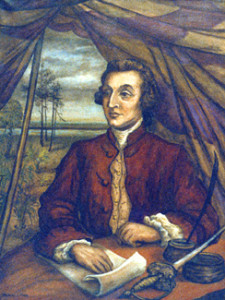 Portrait of James Edward Oglethorpe by Raiford J. Wood. Circa 1955. From the Georgia Historical Society Object Collection, A-1361-600

In August 1739, Oglethorpe set out from Fort Frederica into the Lower Creek Nation, now southeast middle Georgia, with a small group of men. At the assembly, Oglethorpe was able reinforce the existing relationships, which primarily revolved around land and boundaries, between the Native Americans and the British. Oglethorpe negotiated a treaty with the Creek Nation in the hopes of preventing them from “going to the Spaniards.” The Treaty of Coweta, as it came to be known, was signed on August 21, 1739 and more clearly defined areas of land that could be settled by the British and those remaining part of Creek lands. The Treaty stated that lands belonging to the Creek Nation were off limits to the settlers, which helped improve their relationship with the colonists. However, Oglethorpe was unable to convince the Creeks to act as allies to the British. While this meant the Creeks would not help the British in a fight against Spain, the Creeks did promise not to ally itself with Spain. Oglethorpe’s meeting with the Creeks at Coweta could not have come at a better time. Later that year, hostilities came to a head between the British and Spanish when the War of Jenkins’s Ear broke out. As a result of the treaty, the Creeks remained a neutral entity during this war.

Explore the links below to learn more about James Edward Oglethorpe and his meeting with the Creek Nation.

James Oglethorpe is one of GHS’ Featured Historical Figure for the 2016-2017 Georgia History Festival. Be sure to check out GHS’ online learning materials.

The Georgia Historical Quarterly has published the proceedings from Oglethorpe’s meeting with the Lower Creek Indians which can be accessed on JSTOR. If your library does not have access to JSTOR, you can go to www.jstor.org and create a free MyJSTOR Account.