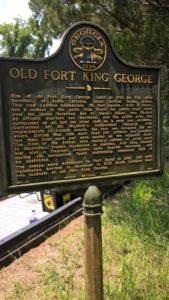 This week’s #MarkerMonday highlights Fort King George, the first British garrison in the Colony of Georgia. During the 1600s and early 1700s, the land around the Altamaha River, now a part of Georgia, was highly coveted territory by the Spanish, French, and British. The British claimed the river as the southernmost boundary of the colony of South Carolina. In 1721, the British army under the command of Col. John Barnwell built Fort King George, the southernmost outpost of the British Empire in North America. The fort was used to defend the southern border of South Carolina against French and Spanish expansion into the area, and against attack by the Guale Indians. 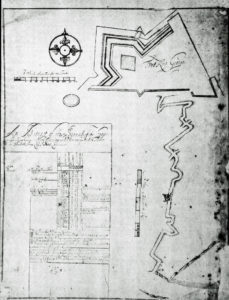 John Barnwell’s 1722 drawing of the route from Fort King George to St. Simons Island. It was here Barnwell wanted to move Fort King George to in that year. The data on the chart at left is navigational information. Accessed via Wikimedia. Public Domain.

Following Fort King George’s completion later that year, Col. Barnwell and South Carolina Governor Francis Nicholson sent requests for young, fit soldiers to man the fort. However, the soldiers sent were retired soldiers deemed fit for light duty, from the Royal Hospital in Chelsea, England. After arriving in Port Royal, South Carolina, troops proceeded to Fort King George. A small company of roughly 100 soldiers comprised His Majesty’s Independent Company of Foot and manned Fort King George. While serving at the fort, soldiers endured disease, threats of Spanish and Native American attacks, and the unfamiliar coastal environment. In 1726, a fire burned down the barracks. The following year, the fort was rebuilt, and a small number of men remained stationed there as look outs, while much of the company withdrew to Port Royal to defend the settlement from attack by the Creeks. Fort King George was eventually abandoned in the early 1730s. Following the founding of the Colony of Georgia, General James Oglethorpe and a company of Scottish Highlanders established a new outpost, Fort Darien, in 1736 to replace Fort King George.

Explore the links below to learn more about Fort King George.

GHS is proud to house a report written to King George I on December 1, 1727, describing conditions at Fort King George and the garrison.  This report is a part of the American Jewish Archives Collection on Georgia History.

The Georgia Historical Quarterly has published several articles related to Fort King George and colonial history in Georgia which can be accessed on JSTOR. If your library does not have access to JSTOR, you can go to www.jstor.org and create a free MyJSTOR Account.