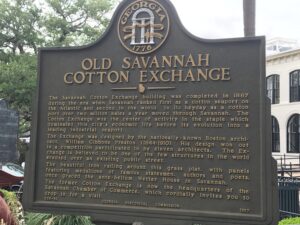 To further examine this year’s Georgia History Festival theme, “From Marshes to Mountains, Georgia’s Changing Landscape: Geography, History, and Community,” this week’s #MarkerMonday examines the Old Savannah Cotton Exchange historical marker in Chatham County. The former Cotton Exchange building was built in 1887, during the era when Savannah ranked first as a cotton seaport on the Atlantic Ocean and second in the world. However, cotton was not always a major Georgia crop.

Prior to the Revolutionary War, cotton was imported from the West Indies through trade within the British Empire, which decreased after America gained independence and tried to achieve economic autonomy. The need to find industries to support Georgia’s economy after the war was the first catalyst pushing cotton towards becoming a major Georgia crop. Georgians found that long-staple cotton fibers could easily be separated from its seeds, but it only grew on the coast. Short-staple cotton grew inland but separating the seeds from the fibers was labor intensive, increasing the cost of production. 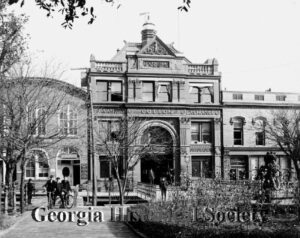 The patent of Eli Whitney’s cotton gin in 1794 allowed cotton plantations to spread further from the coast to grow short staple cotton. The lucrative cash crop also increased the heavy dependence on slave labor by cotton-producing states and directly tied those states to the slave economy.

The cotton gin became popularized just before the Creek War, which resulted in a massive loss of Creek Indian lands in western Georgia and Alabama. The Creek’s loss of land allowed more people to venture west and become part of Georgia’s profitable cotton industry by managing their own cotton plantations (that were heavily dependent on enslaved labor) in the newly acquired lands. Soon settlers began turning their sights to northern Georgia, where the Cherokee Indians resided, setting the stage for Georgia’s, and the cotton industry’s, expansion into northern regions of Georgia.