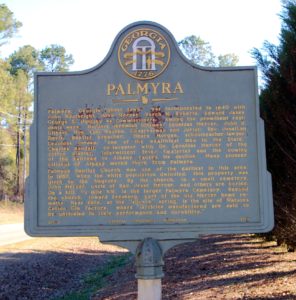 This week’s #MarkerMonday highlights the history of the town of Palmyra, Georgia. During the early 19th century, settlers began to move to southwest Georgia as cotton production in that area of the state expanded. In 1825, Lee County was created by act of legislation from land ceded by six chiefs from the Creek Nation. The community of Palmyra in Lee County was established shortly after and was incorporated in 1840.  Prior to the Civil War, Palmyra boasted a school, post office, doctor’s office, and commercial businesses, and was home to residential farms and plantations. Following the completion of a railroad line to Albany in 1857, many residents of Palmyra began to migrate to Albany, quickly becoming the major railroad center for southwestern Georgia by connecting farmers to Savannah shipping companies and European markets. 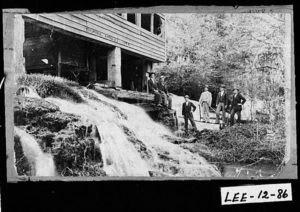 Palmyra, April 28, 1894. Group of men poses for this photograph beside what may have been a mill. Palmyra was located on the Kinchafoonee Creek five miles north of Albany. Image Credit: Vanishing Georgia, Georgia Archives, Morrow, Georgia.

With Palmyra’s population dwindling, many shops and industries either moved to Albany or closed. In the years following the Civil War, the population of Palmyra continued to decrease due to the continued growth of Albany and malaria outbreaks in the county. As Georgians moved into the interior of the state, they cut down trees and cleared land for farming. Deforestation in the area and constant churning of soil disturbed the native mosquito population and led to an outbreak of malaria through much of southwest Georgia. The mosquito-borne disease slowed economic development of part of the state, more so than any other disease at that time. Today, Palmyra is a largely residential area situated in the suburbs of Albany.

Explore the links below to learn more about Palmyra.