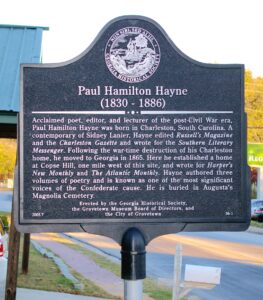 In commemoration of National Poetry Month, this week’s #MarkerMonday looks at the Paul Hamilton Hayne (1830-1886) historical marker in Columbia County. Hayne was born in Charleston, South Carolina, on January 1, 1830, and was publishing poetry in the Charleston Courier under the pseudonym “Alphaeus” by the time he was fifteen years old. Hayne graduated from the College of Charleston in 1850 and pursued a career in law, but his early-literary education led him to continue working as a poet and editor. Paul Hamilton Hayne is considered the unofficial poet laureate of the South for his works promoting the Confederate cause.

Following the burning of his Charleston home during the Civil War, Paul Hamilton Hayne moved to Georgia in 1865. He continued working as a poet, submitting his works to circulating publications across the United States such as Harper’s New Monthly, The Atlantic Monthly, Southern Bivouac, and Home Journal, which is known today as Town & Country. In addition to his poetry, readers could find his critiques of other poets’ works, which were based on his opinion rather than an academic standard. Yet, he was respected among the literary circles of America and Europe.

From his secluded home at Copse Hill, Hayne wrote many pieces on nature and nature’s connection to the Divine. He also described Civil War battles and figures though lyrical means. Like his critiques, most of his poems were inspired by personal experiences and feelings. In “To My Mother,” Hayne thanks his mother for her support of his earliest verses.

To thee my earliest verse I brought,
All wreathed in loves and roses,
Some glowing boyish fancy, fraught
With tender May-wind closes;
Thou did’st not taunt my fledgling song,
Nor view its flight with scorning:
“The bird,” thou saidst, “grown fleet and strong,
Might yet outsoar the morning!”

ART thou some reckless poet, fiercely free,
Singing vague songs an errant brain inspires?
Mad with the ravening force of inward fires,
Whose floods o’erwhelm him like a masterless sea?
No! art and nature wisely blend in thee!

From “To Edgar Fawcett”

The Georgia Historical Quarterly has published several articles relating to Paul Hamilton Hayne which can be accessed on JSTOR. If your library does not have access to JSTOR, you can go to www.jstor.org and create a free MyJSTOR Account.

“The Death of Paul Hamilton Hayne” by Doris Lanier