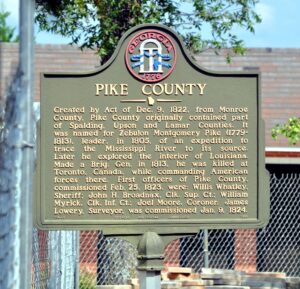 Although there are no records of Zebulon Pike traveling to Georgia, his accomplishments as an explorer helped set the stage for westward expansion. Pike was born in New Jersey on January 5, 1779. He joined the army at age 15 in 1794. By 1805, Pike was a lieutenant and instructed to lead a team of 20 men to discover the headwaters (or origin) of the Mississippi River, stake legal claim of the land for the US, and negotiate peace treaties with Native American tribes. 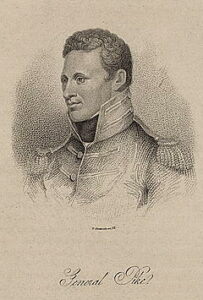 Image courtesy of Library of Congress

As a captain in 1806, Pike was tasked with exploring the Arkansas and Red rivers, two major tributaries of the Mississippi River, surveying the terrain of the Louisiana Purchase. This expedition led Pike to what is now Colorado, and some consider him to be one of the first White men to explore the Colorado wilderness. As his party followed the Arkansas River, Pike noted a mountain that would later bear his name—Pike’s Peak, the highest peak in the southern Front Range of the Rocky Mountains at 14,115 feet. The men were unable to scale the mountain due to heavy snowfall, and it would be another fourteen years before someone did.

On their way back east to report their findings, Pike and his men were captured by the Spanish and held prisoner for about five months before being released near the Spanish-American boarder in Louisiana. Pike’s reports on the Spanish led to increased efforts to expand US territory into Texas. After exploring much of the western frontier, Zebulon Pike died during the War of 1812 during the attack on York on April 27, 1813.

The Journals of Zebulon Montgomery Pike