Marker Monday: Point Peter Battery and the War of 1812

In honor of the 2016-2017 Georgia History Festival, “A State of Innovation,” the October #MarkerMonday posts will focus on the research used to make markers possible as part of Archives Month. Over the course of the month, these posts will talk about examples of how newer research informs and even changes our understanding of places, events, and people. 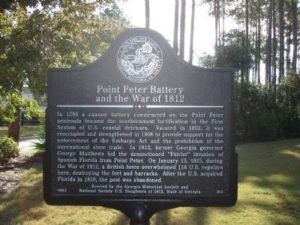 This week’s #MarkerMonday discusses the creation of the Point Peter Battery and War of 1812 historical marker, which reflects new archeological findings about a previously unmentioned fort during the War of 1812.  The original Point Peter historical marker, erected in 1953 in Camden County, discussed two forts having been located in the area during the Revolutionary War era. However, in the decades that followed researchers discovered that both forts, Fort Tonyn and Fort Pickering, were actually located further up along the St. Mary’s River and not at Point Peter. This marker was then relocated to a site closer to the subject of the text.  In 2004, development began in Point Peter for a new subdivision. Archeologists that were called in to excavate the site found remnants of US military occupation at the site of the subdivision dating back to 1796-1820. This structure was a previously unmentioned military battery and barracks used by the Americans during the War of 1812. The discovery adds to the story of the War of 1812 in Georgia and the nearly forgotten invasion of the Georgia coastline by the British in 1815. Based on these new findings, the National Society U.S. Daughters of 1812, State of Georgia conducted additional research and applied for a new historical marker to reflect the existence of the Point Peter Battery. 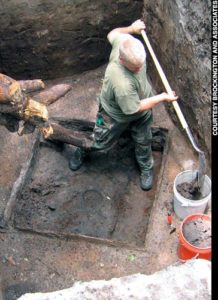 Image Courtesy of Brockington and Associates Inc. Access via Archeology.org

Explore the links below to learn more about Point Peter, the War of 1812, and researching historical markers.