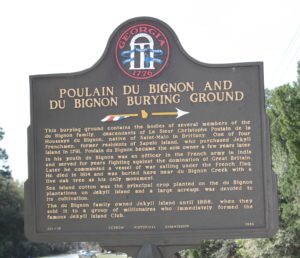 This week’s #MarkerMonday highlights the life of Christophe Anne Poulain du Bignon, who became the owner of Jekyll Island. In 1739, Christophe Anne Poulain du Bignon was born in France to a poor but aristocratic family. At ten years-old, du Bignon went to sea as a cabin boy on the L’Hercule for the French East India Company and rose through the ranks. When the company was abolished by French King Louis XV, he received a pension and joined the merchant marines, becoming a captain. In 1778, France allied with American forces, officially entering the American Revolution against the British. Du Bignon became a privateer in the service of King Louis XVI and harassed British shipping in the Indian Ocean, capturing a dozen ships during the war. In 1784, du Bignon retired to his family home in the French region of Brittany. Following the outbreak of the French Revolution in 1789, the United States received many French immigrants who, like du Bignon, feared an attack on themselves and their families due to aristocratic status and privileges. Du Bignon traveled to Georgia as a partner in the Sapelo Company, which was interested in using Sapelo Island to cultivate sea island cotton. 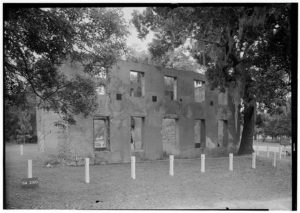 Du Bignon’s connection with the company was short lived, as conflicts between other members of the Sapelo Company and financial issues within the company led him to exchange his portion of Sapelo Island for land on Jekyll Island in 1794. By 1800, du Bignon was the sole owner of Jekyll Island and operated a plantation growing Sea Island cotton. He also operated a shipping business along the Georgia coast between Savannah and Brunswick. However, raids by the British during the War of 1812 and the subsequent liberation of nearly half of the plantation’s slave population followed by the Panic of 1819 (a financial crisis in the United States following the War of 1812), and multiple damaging hurricanes led to the economic decline of the plantation. In 1825, du Bignon died and was buried on Jekyll Island. Owing to his estranged relationship with his eldest son Joseph, du Bignon left the bulk of his estate to his second son, Henry. The du Bignon Family owned the island for four generations, when John Eugene du Bignon, great-grandson of Christophe du Bignon, sold Jekyll Island to the Jekyll Island Club Corporation in 1886.

Explore the links below to learn more about the life of Christophe Anne Poulain du Bignon, the du Bignon family, and their part in the history of Sapelo and Jekyll Island.

GHS is proud to house the du Bignon Collection which focuses primarily on the life of Christophe Poulain du Bignon. The collection contains significant information concerning DuBignon’s seafaring career, his business affairs in France, the Sapelo Company, and the plantation at Jekyll.