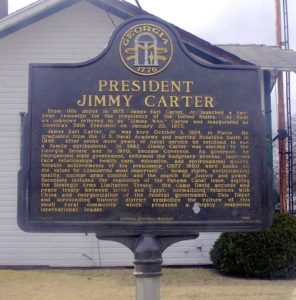 This week’s #MarkerMonday highlights Jimmy Carter, the 39th President of the United States. Although many figures with Georgia ties ran for or became president, Jimmy Carter is the only President to have been a native of Georgia. James Earl Carter Jr.  was born in Plains, Georgia in 1924 to James Earl Carter, Sr., a farmer and businessman and Lillian Gordy Carter, a registered nurse. In 1946, he married Rosalynn Smith, also from Plains, and gained his bachelor of science from the Naval Academy. In the Navy, he served as a submariner and rose to lieutenant. He and Rosalynn returned to Plains after his father died to run the Carter family farms.

As a young man, Carter became involved in the community of his hometown of Plains. He was involved in local public service until 1962. That year, he was elected to the Georgia Senate for his district, which launched his political career. In 1970, he became governor of Georgia. He ran on a policy of reform. Carter promoted both liberal social values and fiscal conservatism as governor, and he continued on those policies during his run for presidency. 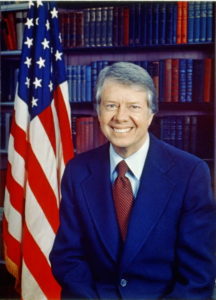 A relatively unknown politician, Carter launched his two-year presidential campaign in 1975. Throughout the campaign, his name spread, and he narrowly won the office against President Gerald Ford in 1976. His distance from the Nixon administration and the Watergate scandal, which led to Ford’s inheriting of the Presidential office, was an asset to his victory.

After leaving office, Carter established the Carter Center in Atlanta, an organization which works to discuss and combat domestic and international policy issues. Since, he, his wife, and the Center received the Delta Prize for Global Understanding. In 2002, he was awarded the Nobel Peace Prize, becoming the third United States President to receive the honor.

Explore the links below to learn more about President Jimmy Carter.

GHS is proud to house the Griffin Bell Papers and the Charles H. Prout Research Materials on Georgia Governors, which includes many primary sources that relate to President Carter. GHS also houses a Jimmy Carter campaign button from the Democratic convention campaign in 1976 and Jimmy Carter Presidential Election clippings and memorabilia.

Wheeler, Leslie. Jimmy Who? : An Examination of Presidential Candidate Jimmy Carter: The Man, His Career, His Stands on the Issues. Woodbury, N.Y. : Barron’s Educational Series, 1976.