This week’s #MarkerMonday highlights the Raymond-Richardson Aviation School in Douglas, Georgia. Following President Franklin D. Roosevelt’s signing of the Civilian Pilot Training Act of 1939, which allowed college students to learn basic flight skills in preparation to receive a private pilot certificate, a Civilian Contract Pilot School was founded in Douglas. As specified by the act’s guidelines, students were required to take a ground course and complete 35-50 hours of flight training. Under the leadership of Wesley Raymond, South Georgia College, and the Civil Aeronautics Authority, construction began on the aviation school in the summer of 1941 by civilian contractor Raymond-O’Neal Aviation Company. The first class of cadets arrived that fall. Following the United States’ entrance into World War II, the aviation school was converted into an army air field and used as the 63rd Flight Training Detachment Airbase. 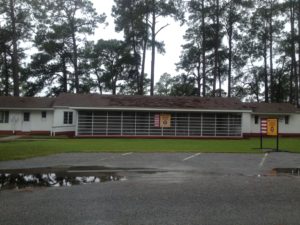 The flight school was reorganized in 1942 under Wesley Raymond and Robert Richardson as Raymond-Richardson Aviation Company, providing the name which continues to identify the air base. Prior to arriving at Raymond-Richardson Aviation School, or other such aviation schools, cadets were required to complete testing at the Classification Center for advanced training placements and attend pre-flight training school.  As a primary flight school, cadets remained at Raymond-Richardson Aviation School for 9 weeks before graduating and moving on to basic flight training and advanced flight training. Pilots who earned their wings went on to fight in every major theater of the Second World War. The base was officially closed in 1944 as the war ended and the air field reverted back to the City of Douglas to be run as a civilian facility. The airstrip and hangers continue to be used as a municipal airport.

Explore the links below to learn more about the Raymond-Richardson Aviation School, the Civilian Pilot Program, and Georgia’s role in World War II.

Boeing. “They ought to get a citation…” Edited by William B. Ziff. Flying Magazine, July 1944, 125. (Ad for flight schools using Boeing planes)