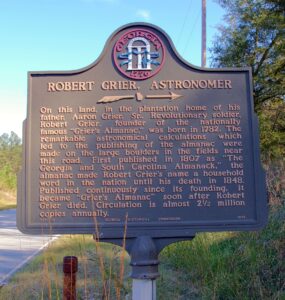 This week’s #MarkerMonday examines the Robert Grier, Astronomer historical marker in Taliaferro County. This historical marker is located near the boyhood home of Robert Grier (1780-1848), although the land was then part of Wilkes County. It was near here that Grier began exploring astronomical calculations that would lead him to create The Georgia and South Carolina Almanack, now titled Grier’s Almanac.

Robert Grier spent his early life studying books in his father’s library, and became proficient in mathematics, which he later used to study astronomy. It is believed that he spent many evenings on a large boulder near his home, which some have called the “Observatory Rock,” studying the weather and sky. Grier’s skills grew and he could successfully predict general weather patterns, moon phases, the dates of eclipses, and the time of sunrise and sunset. When Grier turned 21 around 1801, he went to Union Academy in Greensboro, Georgia, to continue learning mathematics under his uncle Andrew Burnes. During his time at Union Academy with his uncle, Grier began compiling his notes for his first almanac.

In 1807, Robert Grier published the first edition of The Georgia and South Carolina Almanack. Over the years, The Georgia and South Carolina Almanack came to include topics such as “Rising, Setting and Southing of the Stars,” “Twelve Signs of the Zodiac,” “Predictions of the Weather,” “The Three Wonders of Women,” and “The Anatomy of Man’s Body, as Governed by the Twelve Constellations.” The almanac also included civic information about local judges, schools, societies, and businesses. This almanac has been published continuously since 1807, although it has been published under Grier’s Almanac since Robert Grier’s death on May 4, 1848. It continues to provide Southeastern farmers with information on weather, astrology and astronomy, gardening, and so much more. 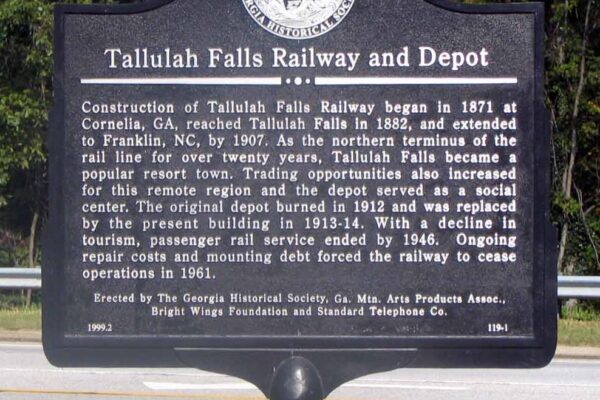