Marker Monday: S.S. James Oglethorpe and the Battle of the Atlantic 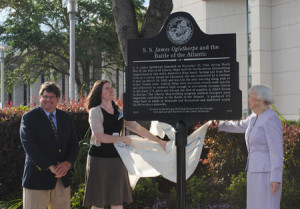 This week’s #MarkerMonday highlights the S.S. James Oglethorpe, the first of 88 Liberty Ships built by Southeastern Shipbuilding Corporation in Savannah, Georgia. During World War II, both the Allied and Axis Powers fought for control of the Atlantic Ocean, known as the Battle of the Atlantic. The Allies used the Atlantic to resupply Great Britain and the Soviet Union, a task made difficult and dangerous due to the German U-boats patrolling the waters. During the war, Georgians built 173 mass produced merchant vessels, referred to as Liberty Ships, in shipyards in Savannah and Brunswick. 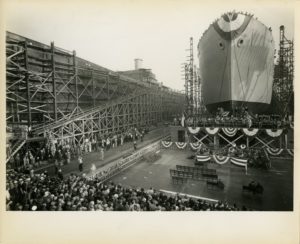 Ceremonies marking the launching of the SS James Oglethorpe, the first Liberty ship completed by the Southeastern Shipbuilding Corporation in Savannah, November 20, 1942. Some of the yard’s 15,000 workers, wearing hard-hats, are at the rear and left of the stage. Georgia Historical Society, Cordray-Foltz Collection MS 1360-30-08-04.

In early 1942, the Southeastern Shipbuilding Corporation received a contract from the United States Maritime Commission to produce Liberty Ships in Savannah. Southeastern Shipbuilding launched its first ship, S.S. James Oglethorpe, on November 20, 1942. After being outfitted for a maiden transatlantic voyage, the James Oglethorpe, joined Convoy HX-229 sailing from New York to Liverpool, England on March 9, 1943. On March 16, 1943, the James Oglethorpe was torpedoed by Walkerling (U-91). The ship tried to make its way to St. Johns in Newfoundland, the nearest harbor, but was lost at sea along with 44 of her 74-man crew. The surviving men, rescued by the H.M.S. Pennywort and the H.M.S. Beverly, landed in Londonderry in Northern Ireland on March 22. Despite the loss of the James Oglethorpe and many other ships during the war, the Liberty Ship-building program pressed on, constructing nearly 27, 000 ships in the United States.

Explore the links below to learn more about the S.S. James Oglethorpe, liberty ships, and Georgia during World War II.

Smithsonian Channel: Battle for the Atlantic

Imperial War Museums: What do you know about the Battle of the Atlantic?

BBC: The Battle of the Atlantic: The U-boat Peril

The American Maritime History Project. Braving the Wartime Seas: A Tribute to the Cadets and Graduates of the U.S. Merchant Marine Academy and Cadet Corps Who Died During World War II. Edited by George J. Ryan. Compiled by Thomas F. McCaffery. Bloomington, IN: Xlibris, 2014.