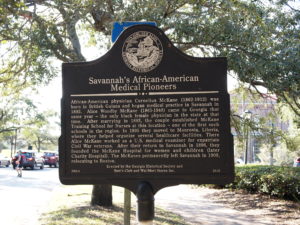 This week’s #MarkerMonday highlights Dr. Cornelius McKane and Dr. Alice Woodby McKane, African-American physicians in Savannah, Georgia. Cornelius McKane was born in Georgetown, Dutch Guiana. He attended school in New York and later enrolled in the University of Vermont Medical College, graduating in 1891. He moved to Savannah after hearing about the lack of African-American doctors and began his medical practice in 1892.

Alice Woodby (1865-1948) was born in Bridgewater, Pennsylvania. She graduated from the Women’s Medical College of Pennsylvania in 1889. After graduation, she moved to Augusta, Georgia, becoming the only African-American female physician in Georgia at that time. In Augusta, Woodby worked alongside Lucy Craft Laney at the Haines Institute, a school established to educate African-American children. Alice and Cornelius met in Augusta and married in the early 1890s. 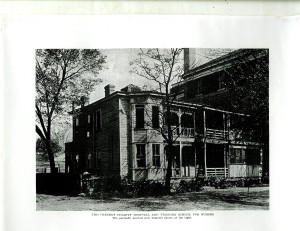 After their wedding, Alice moved to Savannah to join Cornelius and noticed the local African-American community lacked adequate medical care and trained physicians. In June 1893, she established the McKane Training School for Nurses. Following the school’s first graduation, the McKanes moved to Monrovia, Liberia, where they organized several healthcare facilities, including the nation’s first hospital with the American Colonization Society. However, the couple decided to return to Savannah nearly one year later. Back in Savannah, the McKanes opened the McKane Hospital for Women and Children (later renamed Charity Hospital and Training School for Nurses) in late 1896. Concerned for their children’s education, the McKanes relocated to Boston in 1909, where Cornelius died three years later. After his passing, Alice continued to train nurses and published two books, The Fraternal Sick Bed (1913) and a book of poetry, Clover Leaves (1914). She died in 1948.

Explore the links below to learn more about Cornelius and Alice Woodby McKane and their efforts to provide medical training and care in Savannah and elsewhere around the world.