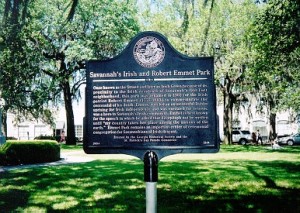 Today’s #MarkerMonday highlights the Savannah’s Irish and Robert Emmet Park in the historic district. The strip of land was originally known as the Irish Green due to its location near the city’s Irish community. It was renamed for celebrated Irish nationalist Robert Emmet in 1902 in preparation for the centennial of his September 20, 1803 execution, which occured after he led an unsuccessful uprising against the ruling British monarchy. The park remains an important part of Savannah’s Irish community, serving as a gathering place for ceremonies.

To learn more and read the marker text in full.