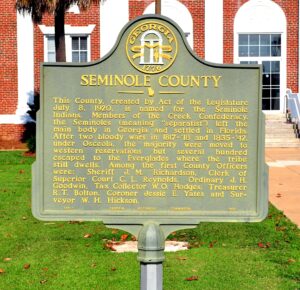 To further examine this year’s Georgia History Festival theme, “From Marshes to Mountains, Georgia’s Changing Landscape: Geography, History, and Community,” this week’s #MarkerMonday examines the Seminole County historical marker. Seminole County is located in the Southwest corner of Georgia and was formed by an Act of the Legislature on July 8, 1920, from Decatur and Early counties.

The Seminole Tribe of Native Americans, the namesake for Seminole County, was first established during the 18th century, and its members lived throughout southern Georgia and northern Florida. The earliest members of the Seminole Tribe left the main body of the Creek Confederacy to escape encounters with and encroachments from colonists moving west in Georgia and to separate from the ruling Upper Creeks, who welcomed trade with the colonies. They did not become widely known as Seminoles until the 1770s, which is believed to be derived from the Creek word simanó-li, meaning “separatist.”

In the post-Revolutionary era, the political boundaries of the newly formed United States spread west to the Mississippi River—territory mostly occupied by Native Americans. As the 19th century began, White settlers became focused on spreading westward from their established cities along the eastern coast. As interactions became more frequent, raids between the Seminoles and settlers increased in frequency and severity after the War of 1812, when the Seminoles aligned with the British over the United States. In 1817, the first of three Seminole Wars began after US soldiers attacked a Seminole village near present-day Bainbridge, Georgia and the Seminoles retaliated. General Andrew Jackson, who later became the President of the United States and oversaw the Trail of Tears, took command of the US troops and led the attack against the Seminole villages. As he traveled, he also seized Spanish-occupied towns, weakening Spain’s hold of Florida.

After the First Seminole War in 1818, the Seminoles began moving further south out of Georgia and into Spanish controlled central Florida and the Everglades. They were also joined by people who left other tribes and people escaping slavery. However, shortly after the end of the first war, in 1819, Spain ceded its Florida territory to the United States, placing the Seminoles back under US rule. 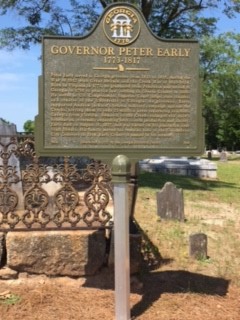 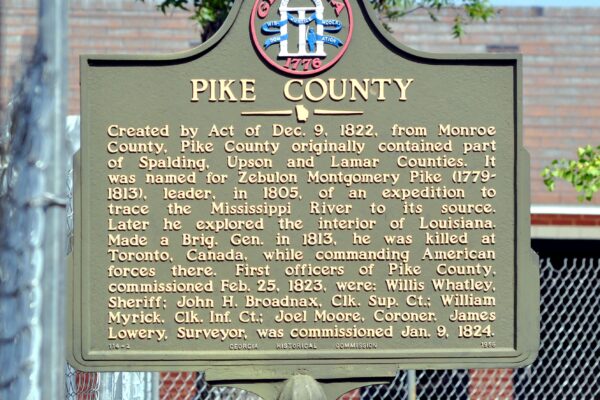