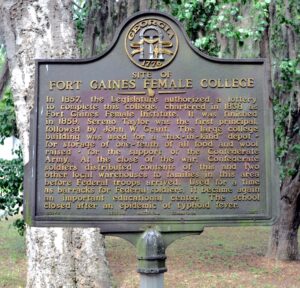 This week’s #MarkerMonday spotlights the Site of Fort Gaines Female College historical marker in Clay County. The school was chartered by the Georgia General Assembly in 1838, as the Fort Gaines Female Institute, with John Dill, Simon Greene, Samuel Gainer, James P. Holmes, and William Mount as the Trustees. Sometime before 1840, they selected Reverend Sereno Taylor as the new principal. The Fort Gaines Female Institute offered primary classes, comparable to today’s high school classes, and collegiate courses to educate young women. Students paid $25, equaling about $751 today, per year for basic courses, $50 per year for courses including musical training, and $100 per year for collegiate courses and boarding options were available.

Preceding his term as the first principal of the Fort Gaines Female Institute, Rev. Sereno Taylor established a successful curriculum as the superintendent of the Sparta Female Model School in Hancock County, Georgia, which boasted an extensive music program. In an advertisement for the school published in The Floridian on January 15, 1840, Rev. Taylor stated, “Former patrons of Columbus, Alabama, and Florida, will find all the advantages of my school at Sparta, in a few months at Fort Gaines.” These advantages included books, maps, globes, and instruments that were not available in all schools, especially in rural schools for girls.

As he was preparing for the opening of the Fort Gaines Female Institute, Rev. Taylor also helped fill the position of principal for the Independent College for Young Men, another school set to open in Fort Gaines at the same time as the Female Institute. Taylor secured the position for his friend Reverend John Brown, D.D. Between the two principals, the schools were expected to provide substantial educational opportunities to the students in Fort Gaines and students who lived on campus. To ensure that both rich and poor White students received the same opportunities, the schools allowed students to complete their education, then remain at the school to work as teachers or laborers to repay their tuition and board to the schools.

Despite the lack of digitized information on the college’s students, there are records describing the educators. The second principal of Fort Gaines Female College, John W. Grant, was noted for his scientific prowess and brought large globes to teach geography and surveying, and a telescope to explore astronomy, and a microscope to teach philosophy of science. These scientific explorations were not commonly found in schools for girls in the 19th century.

Acts Passed by the General Assembly of Georgia