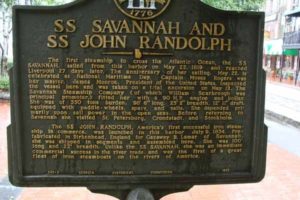 This week’s #MarkerMonday highlights two history-making steamships associated with the Port of Savannah and recognized in a historical marker along Savannah’s famous River Street. The first steamship to cross the Atlantic Ocean, the SS Savannah sailed from Savannah Harbor in May 1819 – 197 years ago this week.  Backed by the Savannah Steamship Company (of which William Scarbrough was principal promoter), the Steamship Savannah reached Liverpool 27 days after departing Savannah Harbor. When visiting Savannah, President James Monroe inspected the vessel and was taken aboard on a trial excursion.  Fifteen years later, the SS John Randolph, American’s first successful iron steamship in commerce, was launched in Savannah Harbor July 9, 1834. Made for Gazaway B. Lamar of Savannah in Birkenhead, England, the John Randolph was sent to America in segments and assembled in Savannah. The SS John Randolph was the first of a great fleet of iron steamboats on the rivers of America. Launched in 1959, the NS Savannah was the first nuclear powered cargo/passenger ship and named in honor of the SS Savannah.

Explore the Links below to learn more about the SS Savannah and her primary promoter, William Scarbrough.