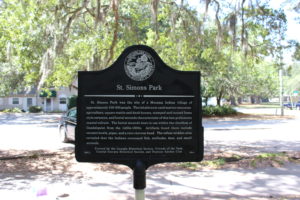 This week’s #MarkerMonday highlights St. Simons Park and the early history of St. Simons Island. Researchers believe human habitation of St. Simons Island dates back 3000-5000 years. One of the first inhabitants of St. Simons Island were the Mocama. The Mocama, a group within the Timuca tribe, occupied the land from the Altamaha River in Georgia to St. Augustine, Florida, including the Sea Islands and the inland waterways. St. Simons Island was also home the Guale people, who used the island as a hunting ground before establishing a village, Guadalquini, in the decades before the arrival of the Europeans. 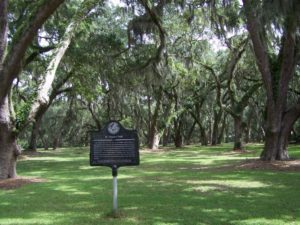 By the 1560s, the French arrived along Georgia’s coastline and constructed Fort Caroline, an outpost of French Huguenots. While the exact location of the fort is still unknown, many historians and archaeologists believe it was built along the banks of the Altamaha River near St. Simons Island. Fort Caroline was eventually overrun by the Spanish based in St. Augustine, and by 1568, the Spanish had run the French out of the territory. The Spanish began establishing missions along the Georgia coast in an attempt to assimilate the Native Americans to the Spanish colonial systems, and by the 1600s, the Spanish had established two missions on St. Simons Island. A combination of raids by pirates from the Caribbean and Native Americans from the Georgia mainland left the missions and villages largely abandoned by the end of the century. The Spanish still maintained a small presence on St. Simons Island when the British established the colony of Carolina in 1670, and had fully retreated from the island toward St. Augustine by 1702.

Explore the links below to learn more about the Mocama, Guale, French, and Spanish that inhabited St. Simons Island before the colony of Georgia was established.

The Florida Times-Union: The tribe “of the sea”

The Florida Times-Union: Mocama: New name for an old people

Science Daily: Oldest fortified settlement ever found in North America? Location of Fort Caroline may be in Georgia

Worth, John E. Struggle for the Georgia Coast. University of Alabama Press, 2007.