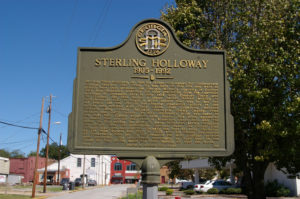 This week’s #MarkerMonday highlights Sterling Holloway, an actor best known as the voice of Winnie the Pooh. On January 4, 1905, Sterling Price Holloway, Jr. was born in Cedartown, Georgia, to Sterling P. Holloway, Sr. and Rebecca Boothby Holloway. Holloway attended Georgia Military Academy (now Woodward Academy) in College Park, Georgia, and went on to attend the American Academy of Dramatic Arts in New York City, graduating in 1923. After graduation, Holloway appeared in minor productions before being cast in the 1925 Broadway musical, The Garrick Gaieties. 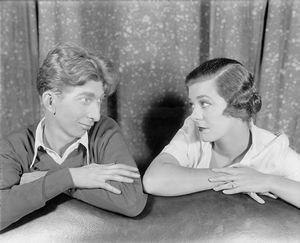 He continued to work on Broadway for several years until moving to Hollywood in 1930 to pursue a career in film and radio. After a slow beginning, Holloway landed roles in such films as American Madness (1932) and The Merry Widow (1934), in addition to working for the radio program The Chase and Sanborn Hour.  In 1941, Holloway began a long career association with Walt Disney Studios as the stork in Dumbo. He continued to work as a voiceover actor in Bambi, Alice in Wonderland, The Aristocats, and The Jungle Book, and most recognizably as Winnie the Pooh in The Many Adventures of Winnie the Pooh. As Holloway’s career in Hollywood began to take off, World War II broke out in Europe. During the war, Holloway was assigned to the army’s Special Services unit, producing a variety show for servicemen and touring on front lines in North Africa and Italy. After the war, Holloway returned to Hollywood and continued to appear in films and made guest appearances on several television shows including, “The Andy Griffith Show,” “The Twilight Zone,” and “Gilligan’s Island.” Holloway retired from film in the late 1980s, citing failing health. In 1991, Holloway was honored as a Disney Legend for his contributions to the studio’s creations. Holloway died from cardiac arrest at 87 in 1992, and his ashes were scattered in the Pacific Ocean.

Explore the links below to learn more about the life and career of Sterling Holloway.