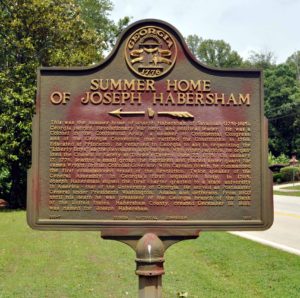 This week’s #MarkerMonday highlights the life of Joseph Habersham, Revolutionary War hero and statesman. Joseph Habersham was born in Savannah, Georgia, to James and Mary Habersham in 1751. Habersham received his education from several preparatory schools before entering Princeton College in the early 1760s. After completing his schooling in 1771, Habersham returned to Georgia and worked as a merchant and planter. Prior to the outbreak of the American Revolution, Habersham and his brothers, James Jr. and John, were supporters of the patriot cause. Joseph Habersham helped organize the Sons of Liberty, or “Liberty Boys,” in Georgia. He was also a member of the Council of Safety that met at Tondee’s Tavern in Savannah. On January 17, 1776, leading a small group and acting on behalf of the Council of Safety, he captured and placed Sir James Wright, Georgia’s Royal Governor, under arrest. 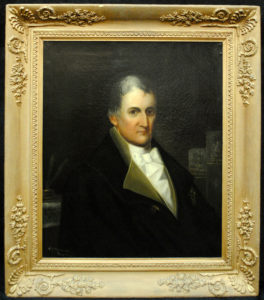 Habersham also became a colonel in the Continental Army. After the war, he served twice as the Speaker of the General Assembly, Georgia’s legislative body following independence from Britain.  During his time in office, Habersham was one of twenty-six men to attend Georgia’s special convention to ratify the United State Constitution. The group met in Augusta and adopted the Constitution on January 2, 1788. After leaving the state legislature, Habersham went on to become the Mayor of Savannah from 1792-1793. In 1795, he was appointed by then-President Georgia Washington to serve as the Postmaster General of the United States and left for Philadelphia and later Washington D.C. In 1801, Habersham resigned his post and returned to his family in Savannah. Once back in Savannah, he became the first president of the Savannah branch of the Bank of the United States. Habersham died in 1815 and is buried in Colonial Park Cemetery in Savannah. Habersham County, created December 19, 1818, was named in his honor.

Explore the links below to learn more about the life of Joseph Habersham and the United States Constitution.

GHS is proud to house a collection of Joseph Habersham’s Papers. This collection consists of an account book and personal letters.

The Georgia Historical Quarterly has published an article related to the life of Joseph Habersham and Revolutionary War in Georgia which can be accessed on JSTOR. If your library does not have access to JSTOR, you can go to www.jstor.org and create a free MyJSTOR Account.