Marker Monday: The Birthplace of Coca-Cola 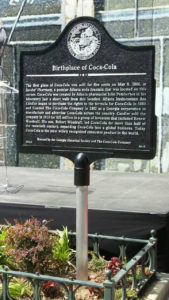 This week’s #MarkerMonday discusses the world’s most recognized brand—The Coca-Cola Company. Pharmacist John Stith Pemberton created the now famous beverage, Coca-Cola. Pemberton, who had studied herbal medicine, developed a syrup from the coca leaf and kola nut. When the temperance movement, a social movement against the consumption of alcohol, came to Georgia, Pemberton added sugar to the syrup and began marketing the beverage, Coca-Cola, as the ideal temperance beverage. Named for the two primary ingredients in Pemberton’s formula, Coca-Cola was first sold in 1886 a short walk from Pemberton’s lab at Atlanta’s Jacob’s Pharmacy. 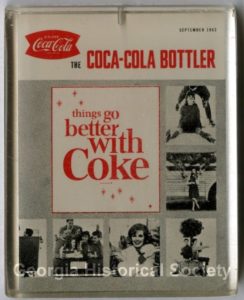 Explore the links below to learn more about The Coca-Cola Company.

GHS is proud to house several artifacts and photographs related to The Coca-Cola Company which can be referenced by searching the GHS collections.

GHS is dedicated to telling the stories of iconic Georgia businesses, like The Coca-Cola Company, through the Georgia Business History Initiative.