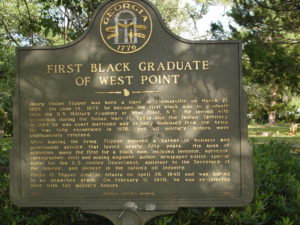 This week’s #MarkerMonday recognizes Henry Ossian Flipper, the first African American to graduate from the U.S. Military Academy at West Point. Flipper was born into slavery on March 21, 1856, in Thomasville, Georgia. After the Civil War, he was educated by the American Missionary Association and attended Atlanta University (later Clark Atlanta University) for a year. In 1873, Flipper became the fifth African American to receive a West Point appointment. Unlike the other African-American cadets, he managed to tolerate the hostile environment created by the white cadets in his class, and graduated from West Point in 1877. As an officer, Flipper served with the Buffalo Soldiers of the Tenth Cavalry in Texas. 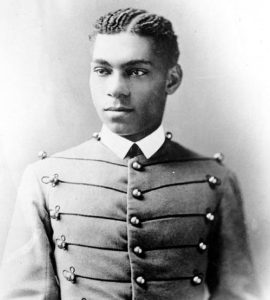 While stationed in Fort Davis in 1881, Flipper was framed by white officers and charged with embezzlement. At his court martial he was found not guilty of embezzlement, however, he was found guilty of “conduct unbecoming of an officer and a gentleman” and was dishonorably discharged from the Army. After leaving the Army, Flipper pursued a career in business and government service, including working as a civil and mining engineer, surveyor, cartographer, and a special agent for the US government on southwestern land claims. From 1901-1912, he worked in Mexico as a mining engineer, and upon his return to the US, Flipper supplied information about Mexican internal affairs to the Senate during the Mexican Revolution. In 1916, Flipper wrote his memoirs, to be published posthumously, Negro Frontiersman: The Western Memoirs of Henry O. Flipper. Flipper moved to Venezuela in 1923, to work as an engineer in the country’s petroleum industry, and retired to Atlanta in 1931. Henry O. Flipper died of a heart attack in 1940. After his death, Flipper’s family applied to the Army Board for the Correction of Military Action for Flipper’s court martial conviction to be over turned.  He was posthumously awarded an honorable discharge in 1976, and a bust of him was placed at West Point in 1978.  Flipper received a full pardon from President Bill Clinton in 1999.

Explore the links below to learn more about Henry Ossian Flipper.