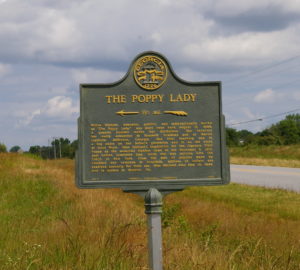 Today’s #MarkerMonday focuses on Moina Bell Michael, The Poppy Lady. Moina Belle Michael was a teacher and native of Good Hope, Georgia. In 1918 Moina took a leave of absence from her teaching position at the State Normal School in Athens, GA, to work for the YMCA Overseas War Workers training headquarters at Columbia University in New York.

Inspired by an illustration of the late Colonel John McCrae’s poem “We Shall Not Sleep”, more commonly known as “In Flanders Field”, Moina committed to wearing a red poppy as a choice of remembrance of soldiers who had fallen in France, and penned her own poem entitled “We Shall Keep Faith.” Moina’s campaign for the memorial poppy earned her the nickname “The Poppy Lady,” and the practice quickly became popular among everyone at the War Workers Headquarters before spreading across the nation and eventually around the world, to remember those who lay buried in France.

Two years later the poppy was adopted by the American Legion and now, nearly a century later, the red poppy is a symbol of remembrance in more than 120 countries around the world.

Follow the links below to learn more about this extraordinary Georgian.