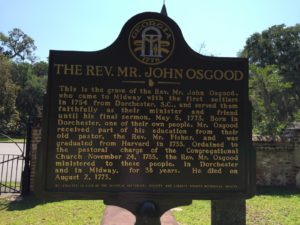 This week’s #MarkerMonday highlights the Rev. Mr. John Osgood, one of the first settlers to Midway, Georgia. Born in 1710 in Dorchester, SC, Osgood was educated by Presbyterian minister, Rev. Mr. Hugh Fisher. Osgood would continue his education at Harvard University, graduating in 1733, and was ordained shortly after. His first pastoral charge began at the Congregational Church in South Carolina on November 24, 1735.  During Georgia’s transition from a Trustee Colony to a Royal Colony in the 1750s, Osgood and a group of his congregants took advantage of the colonial government’s offer of free land in coastal Georgia to settle the area around what became Midway, Georgia. 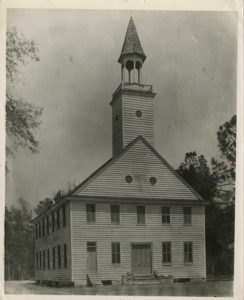 Colonial officials hoped that the land grants would entice large groups of settlers as protection against the Creek Indians. It was also during this time that Georgia’s ban on slavery was lifted. This resulted in many Carolina plantation owners expanding their slave-based rice economy to Georgia.  In 1754, the Congregationalists, many of whom were rice planters, moved to Midway from Dorchester to cultivate rice, ideal for the swampy lowlands, and created a strong agricultural economy. Osgood continued to minister in Midway until his retirement on May 5, 1773.  Osgood passed away a few months later and is buried in the Midway Church Cemetery. Explore the links below to learn more about Rev. Mr. John Osgood and Midway, Georgia.

Explore the links below to learn more about Rec. Mr. John Osgood and this of Midway, Georgia.

GHS is proud to house the funeral sermon preached at the internment of Rev. Mr. John Osgood.

City of Midway, Georgia: Our Past