This week’s #MarkerMonday highlights the newest Georgia Historical Marker in Augusta, Georgia. In consideration of social distancing precautions, the Georgia Historical Society is highlighting the Augusta Riot historical marker with a series of blog and social media posts, rather than a traditional marker unveiling. Today, we look at the Augusta Riot in connection with multiple protests that occurred across America in early May 1970 as a part of a larger movement for political change. 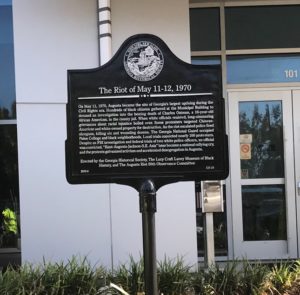 American citizens in 1970 were quickly meeting their breaking point.  Although 1968 is considered the year the Civil Rights Movement ended, many African Americans across the country were still facing racial inequalities and strife. After witnessing resistance over desegregation, activists felt compelled to turn away from the nonviolent methods of the Civil Rights Movement. The continuation of the Vietnam War also sparked protests across the country that were met with forceful resistance. Richard Nixon was elected President in 1968 on the grounds that he would pull American troops out of Vietnam, but instead on April 30, 1970, he made the decision to invade Cambodia. Students protesting the war at Kent State University sparked fear of violent demonstrations, which caused the Ohio governor to send in the Ohio National Guard. By the end of the protests four students were killed. Similar events occurred during the student protests at Jackson State College in Mississippi on May 14. Two students were killed, and the event is now known as the Jackson State killings.

In Augusta, Ga, on May 9, 1970, citizens learned that a 16-year old African-American teenager, Charles Oatman, had been killed in his Richmond County jail cell. Although the circumstances of his death remain unclear even now, many believed it was a result of brutality or negligence. Underlying racial tensions and distrust of city officials—exacerbated by Gov. Lester Maddox’s decision to call in the Georgia National Guard—sparked days of violence and ultimately led to the loss of six Black lives, and cost the city roughly one million dollars in today’s money. Following this event, “Kent, Jackson, Augusta, and Southeast Asia” became a national rallying cry.

GPB Podcasts – Shots in the Back: Exhuming the 1970 Augusta Riot