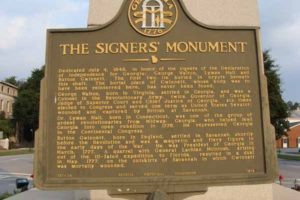 To honor Georgia’s signers of the Declaration of Independence, a monument was constructed in Augusta, Georgia, and dedicated on July 4, 1848. The remains of George Walton and Lyman Hall were interred in crypts beneath the monument. The burial place of Gwinnett, whose body was to have been reinterred with his fellow patriots, has never been positively located.

Explore the links below to learn more about Georgia’s signers of the Declaration of Independence.

GHS is proud to house the Georgia papers from the Continental Congress (1775-1788). GHS also contains a postcard depicting the Signer’s Monument in its Georgia Historical Society Collection of Postcards dating back to the first half of the 20th Century.