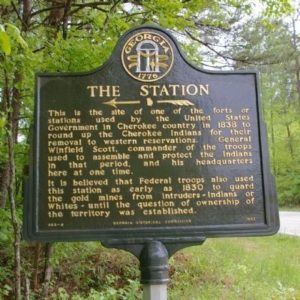 This week’s #MarkerMonday focuses on the Cherokee removal along the Trail of Tears and one of the men who oversaw the removal, General Winfield Scott. Scott, or “Old Fuss and Feathers” as he came to be called, served in three wars as a general and gained fame in the War of 1812 against the British. In 1838, General Scott was charged with enforcing the Treaty of New Echota after President Martin Van Buren ordered the US Army into Cherokee lands. The Station in Cherokee County, Georgia, was one of many forts and stations used by the United States government to board Cherokee Indians in the state before they could be sent westward. General Winfield Scott also used the Station as his headquarters for a period of time. US soldiers held many Cherokees in temporary stockades until they 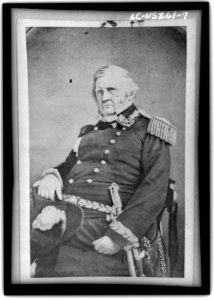 were marched to the Indian Territory, in present day Oklahoma. Many scholars estimate that between 4,000-5,000 Cherokees died on their way to the Indian Territory. This “trail where they cried” is now commonly known as the Trail of Tears. Once in Indian Territory, the Cherokees revived many of their traditions and continued to function as an independent nation. Following the Indian removal along the Trail of Tears, General Scott went on to become a commanding general in 1841 and held the post through the beginning of the Civil War. General Winfield Scott passed away in 1866 and was buried in West Point Cemetery.

Explore the links below to learn more about the Indian removal in Georgia and General Winfield Scott.

GHS is proud to house a significant collection of materials related to the Cherokee people’s removal from Georgia and the Trial of Tears including the papers of Wilson Lumpkin and the correspondence between General Scott and the Secretary of War.

GHS is also proud to house a collection of memoirs from General Scott and other distinguished officers from Scott’s army during the Mexican-American War.

Sequoyah is one of GHS’ Featured Historical Figure for the 2016-2017 Georgia History Festival. Check out the GHS’ online learning materials.